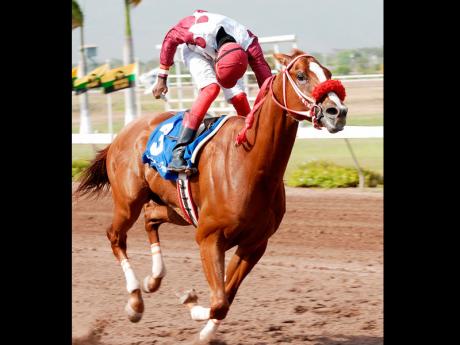 Apprentice Orlando Foster stands in the saddle as he celebrates winning the fifth race over the straight five course aboard SUNLIGHT EXPRESS at Caymanas Park recently. SUNLIGHT EXPRESS (3-1) won by five and a half lengths for owner Carlton Watson and trainer Lawrence Freemantle. - Colin Hamilton/Freelance Photographer

CRUCIAL APPEAL, a beaten favourite over the straight when bolting on June 28, should recoup losses when he contests today's feature race over the straight for the Master Blaster Trophy, a restricted allowance race (non-winners of three other than) for four-year-olds and up.

The race has attracted seven starters and, with most of them running well in recent weeks, it could go down to the wire.

CRUCIAL APPEAL, to be ridden by title-chasing jockey Dick Cardenas for trainer Patrick 'Wacky' Lynch, can expect strong opposition from the recent winner RASTARAVEN, OFFICIAL REPORT now pretty light and the speedy UNGLE G, who faces an easier assignment after his fair fifth to SUNLIGHT EXPRESS over the course on July 9 on a $550,000 claiming tag.

Truth be told, CRUCIAL APPEAL is basically a better horse than any of his six opponents and despite being sparingly raced because of some issues of unsoundness, seems well enough at present to topple this field.

CRUCIAL APPEAL has raced only eight times since making a winning debut over the straight as a two-year-old in December 2012, covering the distance in near track-record time of 56.3.

SIDELINED FOR ALMOST A YEAR

The four-year-old son of Crucial Trial-Late Appeal hardly figured in the classics last year and, after the derby in June 2013, was sidelined for almost year.

He was backed as if defeat was out of the question as the 2-5 favourite on June 28, but after racing prominently coming on to the main track, bolted sharply to the rails while in contention and, as a result, finished 4 3/4 lengths sixth to PRINCE O'SHAUN.

Lynch has taken off the tongue tie for this race and with CRUCIAL APPEAL apparently programmed for this trophy, I take him to outfinish OFFICIAL REPORT and RASTARAVEN from the convenient mark of 51.0kg.

Elsewhere on the 11-race programme, trainer Donovan 'Burru' Thompson should open the programme with his lightly raced four-year-old filly ENHANCE PROSPERITY in the first race over 1200 metres to be contested by seven starters.

ENHANCE PROSPERITY beat all barring GREAT BROWN over the straight when installed a red-hot favourite on July 9, but is that much fitter for this race and, with the competition lukewarm, is tipped to go one Better with 2.0kg claiming apprentice Renardo McNaughton aboard.

Other firm fancies are the Feanny-trained 2-y-o debutant TURN ME LOOSE (working well) in the third race, PRINCESS SHEMIKA in the seventh, PERFECT FLYER in the eighth and CHIEF SECRETARIAT in the ninth race for the Dr Clifford Grey Memorial Cup over 1300 metres.