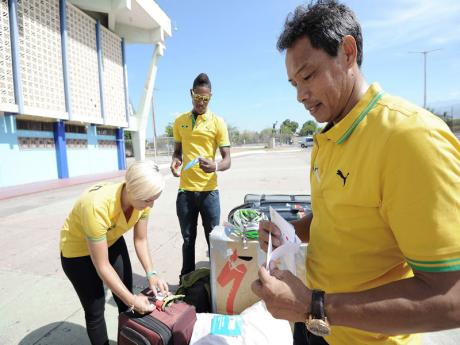 Team manager and federation president, Arthur Tenn, checks documents while cyclists Bianca Hernauld (lef) and Marloe Rodman ready their baggage as members of the Jamaica team congregate at the National Arena prior to their departure for the Commonwealth Games yesterday. - Ricardo Makyn/Staff Photographer

President of the Jamaica Cycling Federation (JCF), Arthur Tenn, is expecting the Commonwealth Games - which gets underway shortly in Glasgow, Scotland, - to aid his association's efforts to advance the sport locally.

"The competition at the Games is at a world class level in our sport. Great Britain and Australia are the power countries in cycling and they will all be there, so the Commonwealth Games provides a great platform for us to advance the sport locally," Tenn told The Gleaner.

On the female side, Palmer will saddle up for the 500m, sprints and keirin events, with Hernould competing in the scratch, pursuit, time trial and road race categories.

Marloe Rodman and Oneil Samuels will both feature in the scratch, points and road race competitions, with Robert Barnes carving his name in history as Jamaica's first representative in the mountain cross competition. He will also ride in the road race.

Tenn is expecting all the riders to give a good account of themselves, but is particularly pleased about the country's entry in the mountain cross event, which he believes can really take off in popularity among casual riders.

"We have two females and three males and for the first time we are entering the mountain bike competition, so that's new for Jamaica. But I think he'll do a good performance and then the other two male riders, I am also expecting them to do well," Tenn said.

"Mountain biking is a new sport overall, but it has become very popular worldwide, especially for recreational riders and I think for Jamaica we have the terrain and the trails and I think we can advance or progress from the sport," said Tenn. "Even for eco-tourism I think mountain biking would be great for our country."

Tenn is also excited about Lynch's appointment as coach of the team and believes his experience as a competitor at this level will be vital in Glasgow.

"He (Lynch) has been working with some of the athletes since January. We just started, but with our experience, we are looking forward to developing cycling much more," said Tenn.

"It helps having his experience and it's a way of giving back to the country and the younger riders are very eager to learn from someone with as much experience and success."

Also leaving the island yesterday were officials from the Jamaica Athletics Administrative Association (JAAA) and several locally-based track and field athletes, as well as members of the boxing delegation.

The cycling competition will get underway on Thursday, July 24.