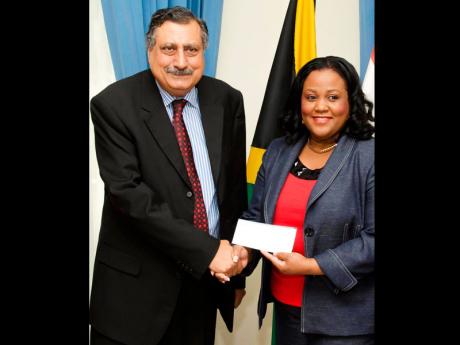 - Natalie Neita-Headley (right), minister with responsibility for sports, receives a cheque valued at US$1.3 million from H.K. Mohan, chargé d'affaires, High Commission of India, representing the final instalment of grant funding from the Indian government for the Sabina Park Lighting Project. Floodlights are being installed at Sabina Park to allow for the playing of night matches. The cheque was handed over at a ceremony held at Jamaica House recently. The total cost of the project is US$2.7 million. - Contributed 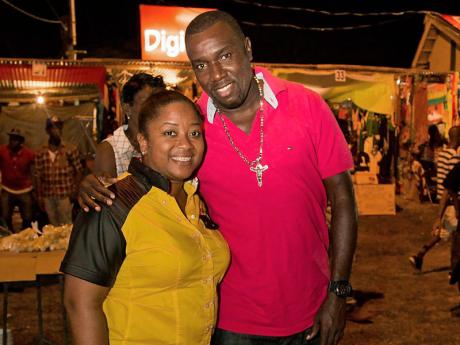 The matches on are defending champions and Zone A winners Eagles Strikers vs Mister C from Spanish Town, and Zone B winners Eastern All-Stars, the home team, vs Mystix, both to be played simultaneously.

Manchester welcomes both the Under-13s and Under-15s from St Elizabeth at Kirkvine, while St Catherine entertain their Clarendon counterparts at Spanish Town Prison Oval. The Under-13 match is slated for 1:30 p.m., followed by the Under-15s at 3 p.m.

On Wednesday, Manchester's Under-13 team drew with St Catherine at Spanish Town Prison Oval 1-1, a vast improvement on the 6-1 beating they received when the teams first met at Clarendon Park. The teams also drew 1-1 in the Under-15s, but it was an improvement for St Catherine, who had lost to Manchester in the first round.

The Manchester Rifle and Pistol Club (MRPC) offers all shooters a chance to prepare for the upcoming Caribbean Cup series with an eight-stage match at its Lincoln range in Manchester tomorrow.

The Caribbean Cup is a sanctioned Level Three tournament by the International Practice Shooting Confederation and will be hosted in Jamaica over two days next weekend. One leg will be hosted at the Jamaica Rifle Association (JRA) and the other, the following day at the Woodleigh range in Clarendon. The Caribbean Cup will be an extensive test of shooting skills as it will involve 16 stages, eight each day at either site.

Tomorrow's match at MRPC will be eight stages, with a target round count of 110.

Last weekend, MRPC hosted the second leg of its flagship tournament - the National Street Gun Championship. Orville Henriques won, but the huge surprise was the second-place finish of Evan Grant, who copped a magnificent 89 per cent. Grant, a B-class shooter, beat into third place higher-rated Sue Ann Henriques, with Thomas Jones, Ellsworth Dixon, and Owen Campbell taking the minor spots. All six are expected to go at each other tomorrow. Guest shooters from the JRA are expected to compete.


The quarter-finals of the Manchester Netball Association's parish league will be played next Wednesday, July 23, at Manchester High School.

Following the completion of preliminary matches across four zones last weekend at the Battersea Community Centre on Winston Jones Highway, it was determined that Rose Strikers and Holmwood B emerged from Zone One; Mile Gully and G Strikers from Zone Two; Legendary and Purple Stars from Zone Three; and, from Zone Four, Holmwood A and Knox A.

The quarter-final line-ups will be Rose Strikers vs Purple Stars, Knox B vs Legendary, Mile Gully vs Knox A, and G Strikers vs Holmwood A.

In selected results from last weekend, Knox B defeated Manchester Academy 26-18, Ridgemount and Greenvale drew 13-all, Rose Strikers beat Holmwood B 24-14 and also won against Knox B 26-8.

Manning Cup champions Kingston College and former daCosta Cup winners Glenmuir High are the headliners for the Knox Cup, which will take place at Brooks Park, Mandeville, on July 30 and 31.

The four-team tournament is being organised by Courtney Jackson, the man who will take charge of Knox College's campaign in the 2014 daCosta Cup. Completing the cast are the hosts and Muschette High from Trelawny.

The tournament will follow a league format, with teams playing for the Clifton 'Dove' Williams Trophy. It is being proposed that there will be matches in the morning as well as afternoon.

The C&D Construction and Engineering Ltd-sponsored Manchester FA 2014 Under-13 competition came to an end last weekend with Manchester Academy ending as champions.

Manchester Academy is the club name used for players who attend Manchester High, as the competition according to FA rules is only open to its affiliate clubs.

Both the semi-finals and finals were completed on the same day. In the semi-finals, Jevaughn McInnes scored to give Manchester Academy a 1-0 win over Alligator Pond.

In the other semi-final, Rohane Brown scored to provide Villa United a 1-0 win over Mile Gully.

Christiana easily topped the proceedings unbeaten after scoring 18 unanswered goals in three matches. They kicked off the competition by tagging Comfort 7-0, before bashing Gold Star 8-0. Mile Gully provided the only competitive encounter against them, but still lost 3-0.

A new champion was crowned in the Power of Faith Ministries (PFM) Church Netball League as 65 Waltham Park Road New Testament Church of God (NTCOG) defeated PFM 23-21 in a nail-biting final at Dunbeholden Sports Complex. Top shooter Janelle Green led the way for 65 Waltham Park Road NTCOG as she made 16 shots from 19 attempts, while Regina Clarke supported with seven goals from nine attempts.

Power of Faith's Melonie Daley was her team's best shooter, with 14 shots from 16 attempts, while Debbie-Ann Coghiel made seven shots from nine attempts.

Portsmouth Cricket Club will look for their fourth win in as many matches as they take on Colours International in the Milo-sponsored Portmore Cricket Association Portmore Under-17 Cricket League tomorrow at Bridgeport sports ground.

Portsmouth have amassed 12 points from three wins and one loss - by a wicket to Ken's Wildflower.

With the win, Daytona moved to six points from two matches and the early lead in their zone. In other games in the zone, Waterford moved to four points as they tagged Westport 2-0, while Edgewater bounced back from an earlier loss to clip Portsmouth 2-1.

In Zone A, Hellshire United were the bigger winners, as they thrashed Bridgeport 5-0, Watson Grove defeated Cedar Grove 2-0, while Cumberland and Naggo Head drew 1-1.

In Zone B, Newland had the widest margin of victory, as they hammered Rodwood 5-0. Dunbeholden made it two wins from as many starts as they beat East Portmore Portals 3-0, while Christian Pen got full points for their fixture as Portmore United failed to show.

The league, which started recently, has attracted 20 teams divided into three zones. The three zone winners and the best second-place team will advance to the semi-final.

Odane McPherson struck a double to take his tally to 11 goals for the season as his team, Edgewater FC, defeated Cumberland 2-1 in one of two semi-final matches in the Colin Fagan-sponsored Portmore Under-15 Football League last Saturday.

In the other semi-final game, Portmore United eliminated East Portmore Portals 3-0. The final is tentatively set for Saturday, July 26.

CAPTION - Natalie Neita-Headley (right), minister with responsibility for sports, receives a cheque valued at US$1.3 million from H.K. Mohan, chargé d'affaires, High Commission of India, representing the final instalment of grant funding from the Indian government for the Sabina Park Lighting Project. Floodlights are being installed at Sabina Park to allow for the playing of night matches. The cheque was handed over at a ceremony held at Jamaica House recently. The total cost of the project is US$2.7 million. - Contributed