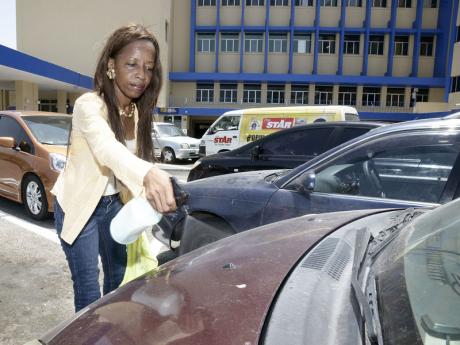 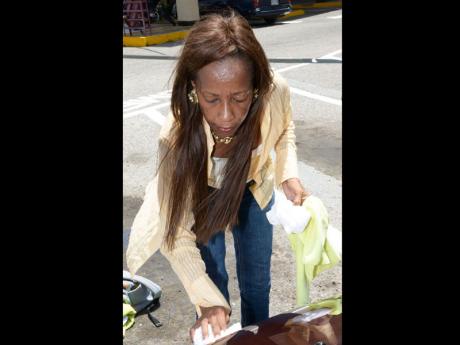 Nichola Orr sprays WATA-LESS on a vehicle's metalwork, in preparing to clean it. - Photos by Gladstone Taylor/Photographer 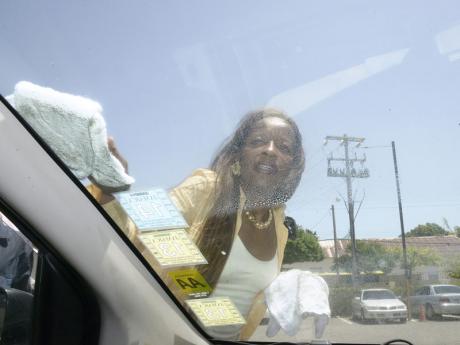 Nichola Orr rubs WATA-LESS on to a car she is cleaning.
1
2
3

As the water restriction orders remain in effect - including a restriction on washing cars with hoses - and it was recently announced that there is less than a month's supply of water remaining for the Corporate Area, car cleaning continues to be a difficulty.

An enterprising Jamaican entrepreneur, who operates a car wash franchise in the United States, now hopes to provide desperate motorists with a motor vehicle cleaning option which she designed. Nichola Orr has already provided samples of her waterless car cleaner to local car dealers and hopes to introduce the product to the general market next month.

It is trademarked as the WATA-LESS car wash solution, an eco-friendly mixture of natural ingredients.

Idea for the product

Orr told Automotives that she conceptualised the product after a visit 'Down Under'. "I went to Australia 15 years ago and they don't use water to wash cars there. So I came back with the idea and totally forgot about it, but then started doing some research on it with my son," she said.

She continued: "I was opening a new business and I said to myself, why not do this? People want to keep their cars clean. How are we going to do it without using any water? I contacted the chemist and said this is what I want and told him what scent."

Having initiated and carried through the process, Orr now says "This product is unique to me. I have the patent, I have everything for the product." She entered the car wash business seven months ago and, Orr claims, her product has been booming.

Orr, who now resides in Florida, has been away from Jamaica for decades, but felt compelled to return to promote her product as a drought continues to affect the island.

WATA-LESS is a product for the vehicle's exterior and interior. Orr explained that it "cleans, shines and protects all paints, clear coats, rubber, vinyl and plastic surfaces, including chrome and fibreglass. It will even remove stains from the inside of your vehicle, rugs, seats, headliners and so on."

She emphasised an attribute which makes it easy to use - and also easy on the surface WATA-LESS is being applied to. "It separates the dirt from the car, so when you are wiping it gently you are not wiping the dirt into the paint and destroying it, like when you are using the bucket," she added.

The product's main ingredients are carnauba wax and kaolin clay. According to Orr's website, www.waterlessecocarwash.com, "Carnauba wax, known as Brazil or palm wax, is environmentally safe and earth friendly; there is no kerosene, no harmful silicones, and (it) consists of no abrasive agents.

"Because carnauba is a natural plant by-product, it will not negatively react to paint. It provides an extra film over your car's surface, protecting against airborne contaminants such as acid rain residue, catalytic converter emissions, bug-tar, tree sap, road grime, salt and bird droppings."

The other major WATA-LESS component is also explained extensively on the website. "Kaolin clay, also referred to as China clay, is a natural, non-abrasive surface preparation which gently pulls out grit, tar, grime, oil and pollution from the vehicle's paint or clear coat surface. Kaolin clay protects the car's finish from environmental damage, like oxidation, acid rain and rain marks," Orr's website explained.

She suggested that using the WATA-LESS car cleaning process motor vehicle owners will only need to wash their cars once per week.

Although Orr is yet to decide on the product's retail price, she plans to open talks with Water Minister Robert Pickersgill about bulk importation. "I would like to sell it to every Jamaican, so I am going to sell it in the 16oz containers, 32oz containers, and the larger containers by the gallon," she said.

"A gallon will do 35 Honda Accords," she emphasised. "I would like the duty dropped, so it's affordable to all Jamaicans."

See video of Nichola Orr using WATA-LESS to clean a vehicle on The Gleaner's website, www.jamaica-glener.com