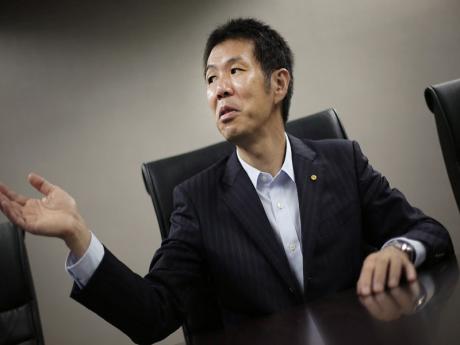 In this July 10, 2014 photo, Toyota Motor Corporation Managing Officer Satoshi Ogiso talks about the Toyota FCV fuel cell vehicle during an interview with The Associated Press in Tokyo. - AP PHOTOS 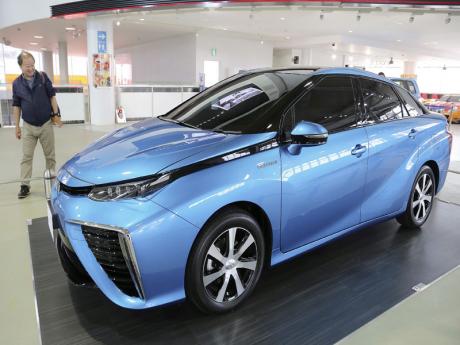 In this June 26, 2014 photo, a visitor looks at Toyota Motor's new fuel cell vehicle (FCV) on display at the company's showroom in Tokyo. 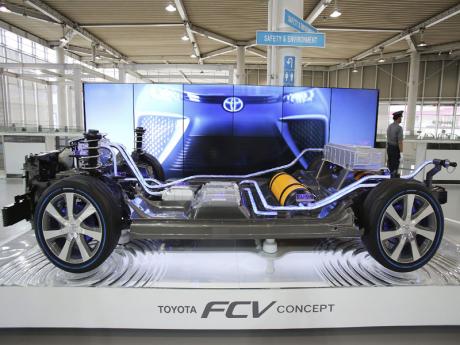 Rocket science, long dismissed as too impractical and expensive for everyday cars, is getting a push into the mainstream by Toyota, the world's top-selling automaker.

Buoyed by its success with electric-gasoline hybrid vehicles, Toyota is betting that drivers will embrace hydrogen fuel cells, an even cleaner technology that runs on the energy created by an electrochemical reaction when oxygen in the air combines with hydrogen stored as fuel.

Unlike internal combustion engines which power most vehicles on roads today, a pure hydrogen fuel cell emits no exhaust, only some heat and a trickle of pure water.

Fuel cells also boast greater efficiency than the internal combustion process, which expends about two-thirds of the energy in gasolene as heat.

Toyota's fuel cell car will go on sale before April next year. Despite advantages that are seemingly compelling, the technology has struggled to move beyond its prototypes after several decades of research and development by industry and backing from governments.

For the auto industry in particular, there have been significant hurdles to commercialisation, including the prohibitive expense of such vehicles. On top of that, fuelling stations are almost nonexistent. Doubters also quibble about the green credentials of fuel cells, because hydrogen is produced from fossil fuels.

But Satoshi Ogiso, the engineer leading the Toyota project, is confident there's a market that will grow in significance over time.

Part of Ogiso's optimism stems from his background. He worked for 20 years on Toyota's Prius hybrid.

The Prius, which has an electric motor in addition to a regular gasolene engine, was met with extreme scepticism at the start. But it went on to win over the public as a stylish way to limit the environmental damage of motoring. Worldwide sales of Toyota's hybrids have topped six million vehicles since their debut in 1997.

"The environment has become an ever more pressing problem than in 1997," Ogiso said in an interview at the automaker's Tokyo office.

"Hydrogen marks an even bigger step than a hybrid. It is our proposal for a totally new kind of car. If you want to experience this new world, if you want to go green, this is it."

Toyota, which began working on fuel cells in 1992 but won't disclose how much it has invested, is not the first automaker to produce such a vehicle. Forklifts powered by fuel cells are becoming more common in factories and fuel cell buses have been trialled in some cities.

General Motors Company has also been working on the technology and Honda Motor Company already sells the FCX Clarity fuel cell sedan in limited numbers and is planning a new fuel cell car, with a more powerful fuel cell stack next year.

But Toyota's decision as the world's top-selling automaker to start commercial production of a fuel cell car is an important boost to the technology's prospects for wider adoption. Its release will also win the automaker plaudits for corporate responsibility.

Toyota's still-to-be-officially named vehicle goes on sale in Japan sometime before April 2015, and within a half year after that, in the United States and Europe.

The four-seater sedan, while sporting an aggressive grille and fluid body curves, looks pretty much like a regular car. Those who have test-driven fuel cell vehicles say they have a powerful torque, with quick acceleration, akin to the thrill of driving a sports car. Yet, they are quiet like electric cars, purring on the roads with no engine roar.

Ogiso, like many other experts, believes that reliance on gasolene is not sustainable in the long run, particularly with rapid growth in vehicle ownership in developing nations, which could translate into hundreds of millions of additional cars on the roads globally.

Working on the Prius and the fuel cell, he said, was a similar process: Painstakingly tackling the challenge of packaging all the special parts needed for a new type of car.

Like the initial years of the Prius, subsidies and tax breaks are expected to substantially lower the fuel-cell price tag in Japan.

Ogiso said at the beginning it cost more than yen100 million (US$1 million) to build just a test car.

The planned commercial model will sell for about yen7 million (US$70,000). Initially, Toyota had said the car might cost as much as yen10 million (US$100,000). Overseas prices have not yet been announced.

Factoring in subsidies and tax breaks, buyers might be able to get the fuel cell for about yen5 million (US$50,000), said Okumura, the Chiba-gin analyst.

Toyota has not given sales projections, but says interest in the fuel cell has been strong.

Apart from cost, the other big drawback is lack of hydrogen fuelling stations. Only about 30 of them exist throughout Japan so far, although the government is leading a push to get more built in coming months.

Lack of charging stations is also a weakness for electric cars, but there are fewer obstacles to establishing and supplying that infrastructure because electricity networks are already in place.

That is one of the reasons why automakers such as Nissan Motor Co. and Tesla Motors are pushing electric vehicles as the most practical way to be a green driver.

"We are a little bit sceptical," Nissan CEO Carlos Ghosn said of fuel cells. "Who's going to build the infrastructure?"

Toyota, however, counters that electric cars tend to have limited cruise ranges, relegating them to a niche. Hydrogen fuelling takes only three minutes versus several hours to charge an electric vehicle.

The planned fuel cell runs about 700 kilometres (430 miles) on a single hydrogen fuelling.

"There really isn't anything good that happens for the consumer by getting a fuel cell," he said, compared with a hybrid's savings on gas consumption.

Beyond that, Hatano said hydrogen is now mostly produced from fossil fuels.

"You are using energy to create hydrogen, and then using more energy to pressurise it for storage, and so overall you aren't saving on energy at all."

But scientists are working on cleaner ways to make hydrogen, and, in theory, hydrogen is cheap, plentiful, and possibly the next-generation fuel for motorists.