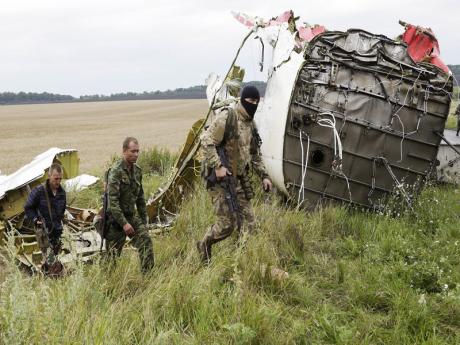 Pro-Russian fighters walk at the site of a crashed Malaysia Airlines passenger plane near the village of Hrabove, Ukraine, eastern Ukraine, Friday, July 18. Rescue workers, policemen and even off-duty coal miners were combing a sprawling area in eastern Ukraine near the Russian border where the Malaysian plane ended up in burning pieces last Thursday, killing all aboard. - AP

The shooting down of a Malaysian Airlines plane with nearly 300 people on-board over war-torn eastern Ukraine is likely to have profound consequences for the world's airlines.

Airlines are already being more vigilant about avoiding trouble spots. That will make flights longer and more costly because of the need for extra fuel — an expense that will be passed on to passengers. They may be quicker to abandon routes near conflict areas.

In the aftermath of last Thursday's disaster, carriers around the globe rerouted flights to avoid Ukraine. Malaysia Airlines announced that it will no longer fly over any portion of the country, routing flights over Turkey instead.

Some airlines had been circumventing the country for weeks after warnings from aviation authorities, and experts questioned Malaysia's decision to fly near the fighting.

"I find it pretty remarkable that a civil airline company — if this aircraft was on the flight plan — that they are flight-planning over an area like that," said Robert Francis, a former vice- chairman of the National Transportation Safety Board.

The airline noted Friday that other carriers flew the same path in the days and weeks before — and even on the same day its plane was shot down. Malaysian Transport Minister Liow Tiong Lay insisted again Friday that the airline's path from Amsterdam to Kuala Lumpur was an internationally approved route.

Violence in Ukraine between government forces and pro-Russia rebels in the country's east erupted after Russia annexed Ukraine's Crimean Peninsula in March. Earlier this week, the rebels claimed responsibility for hitting a Ukrainian military jet with a portable surface-to-air missile; the pilot was able to land safely. And the government charged that a military transport plane was shot down by a missile fired from Russian territory.

The US Federal Aviation Administration had warned pilots in April not to fly over parts of Ukraine, and the UN's International Civil Aviation Organization told governments to warn their airlines. Thursday's crash, however, occurred outside those warning areas, prompting the FAA to expand its prohibition to eastern Ukraine.

Thomas Routh, an aviation attorney in Chicago, said it would be unusual for an airline to ignore such warnings, but he said there are many dangerous air corridors and airlines must decide whether a flight will be safe.

"There are airlines flying through Afghanistan airspace every day," Routh said.

Greg Raiff, an aviation consultant in New Hampshire, said that if airlines must avoid all the world's hot spots, flight times would be extended, requiring extra fuel and pilots. Some routes will become uneconomical, forcing airlines to abandon them, he said.

Aviation experts said that many airlines continued to fly over Ukraine despite the warnings because it offered a shorter route that saved fuel. Malaysian officials denied that was their motive.

Joshua Marks, CEO of aviation-data firm masFlight, calculated that flying over Ukraine instead of around the country saved Malaysia Airlines up to $1,500 per flight in fuel, or two per cent, and shaved about 10 minutes off the trip.

Ukraine closed the eastern region to air traffic below 26,000 feet on July 1 and extended the ban to 32,000 feet on Monday. An official with Eurocontrol, a consortium of European air traffic agencies, said about 350 planes had been flying over the area every day before the restrictions, but that had dropped by about one-fourth before Thursday's crash.

By Friday, snapshots from flight-tracking services showed dense traffic to the west of Ukraine, light traffic over western Russia, and very few planes over Ukraine.

Some airlines had already changed their routes.

Australia's Qantas stopped flying over Ukraine several months ago and shifted its London-Dubai route 645 kilometres (400 miles) to the south. A spokeswoman declined to explain the change. Korean Air said it rerouted cargo and passenger flights in early March as the situation in Crimea deteriorated.

Beyond Ukraine, Emirates recently stopped flying over parts of Syria as a civil war expanded. Some airlines have curtailed service in Iraq, where violence has escalated between the government and a jihadist militant group. The FAA has current warnings about flying over parts of Iran, Yemen, Egypt's Sinai peninsula, North Korea and other countries.

Last month, a gunman in Pakistan fired on a jetliner that was landing in Peshawar, part of the country's volatile northwest region, killing a passenger and wounding two other people. Emirates suspended flights to Peshawar, and other carriers cancelled some flights while they reviewed airport security. Two weeks before that, gunmen attacked the country's busiest airport in Karachi.