Moral authority or not … US must save Jamaicans from themselves 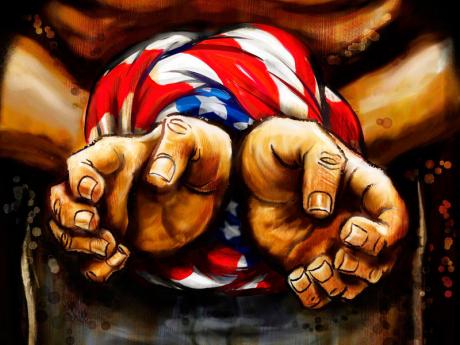 Former Prime Minister Bruce Golding fired up a torrent of comments following his sharp criticism of the United States, which he charged as having "no moral authority" to punish Jamaica for alleged human-rights violations. Golding was referring to widespread rumours that former police commissioner Owen Ellington, was pushed into retirement under American pressure because of police killings.

Speaking to the country's pre-eminent newsman on his new show, 'Cliff Hughes On-Line', Golding cited US drone killings of innocent people, including children, asking, "What right does that country have to talk to anybody else, or any other country, about extrajudicial killings?" And many ordinary Jamaicans have been bemoaning our diminished or vanquished sovereignty in light of our economic underdevelopment and consequent vulnerabilities.

Increasing fears that Americans and Europeans are getting ready to use their money power to press Jamaica into accepting gay rights, now reframed by them as human rights, are fuelling near-hysteria. Now this sudden, unexpected and unexplained (as far as the public is concerned) retirement of Ellington, under supposed American pressure, is pushing the fears beyond panic. Ellington's own spokesman, attorney-at-law Howard Mitchell, referenced the US Leahy Law - a human-rights tool to withdraw aid from security units thought in breach of human rights - in speaking of his client's hasty departure.

Said Mitchell in an interview with Earl Moxam: "If Uncle Sam says you have to go, chances are you have to go. The focus I take that from that is that we should make every effort to make ourselves independent once again." Mitchell added: "I have become convinced that largely because of the way we have handled our affairs in Jamaica, the idea of sovereignty and independence exists (only) in our minds."

If Jamaica were only rich enough, nobody could force us not to abuse our own citizens and not to trample on their human rights. We could tell them to go to hell with their money and we would keep our own wayward ways and do what the hell we like with our citizens because they are locked up in our borders. Now I know Mitchell and other nationalists would not put it that way. I know they defend human rights.

Besides, there is no evidence that Owen Ellington sanctioned human-rights violations in the force (though the issue of ultimate responsibility is distinct from personal culpability.) But our popular notions of sovereignty need updating.

I am a staunch anti-imperialist. Buy my book of columns, Ideas Matter, and read my 'In Focus' articles sharply critiquing US imperialism. Golding is absolutely right about American hypocrisy on human rights. America has no moral authority to lecture any nation on human rights. Its sordid record of human-rights violations are too well documented and transparent for it to make any such credible pretence.

Selective morality, geopolitical expedience and crass realpolitik have governed US foreign policy throughout its Great Power history. Obama, incidentally, has faithfully followed in that Grand Strategy of double standards, though in more moderate ways. Despite my anti-imperialist credentials, I say America, with all its squandered moral authority, is needed to protect millions from human-rights abusers and oppression by their own governments.

Let's get realistic about international politics. There are no virtuous actors. There is no pure, altruistic Great Power. All states have their own interests. No state acts out of unblemished moral clarity.

But to say that because the US is hypocritical and imperialistic in its foreign-policy pursuits, there is no value in its pressuring governments that oppress its own people, and that have police and military wantonly killing citizens, is utter naivety. Pressure put on oppressive regimes in Sudan, Somalia, Zimbabwe, Congo, Syria, Egypt, Tunisia, Libya, and North Korea, Iran is an objective good, even if America's prized dictators are let off the hook. Better to get some human-rights violators rather than none.

This notion of non-intervention in the internal affairs of nations and of territorial integrity has evolved into The Responsibility to Protect Doctrine, which has now been enshrined in the United Nations itself. Responsibility to protect people against genocide, human-rights abuses, and ethnic cleaning trumps state sovereignty and non-intervention. China hides behind that archaic doctrine of non-intervention to justify its naked neglect of human-rights abuses in dictatorships it supports, just to extract their minerals and buy political and economic favours. Europe and America have privileged human rights and people sovereignty over state sovereignty. And international law has moved in that direction.

Former United Nations Secretary General Kofi Annan, has been a principal defender of this emerging view of sovereignty. Annan says the UN Charter "protects the sovereignty of peoples. It was never meant as a licence for governments to trample on human rights and human dignity". He went on to observe: "State sovereignty, in its most basic sense, is being redefined. States are now widely understood to be instruments at the service of their peoples, and not vice versa. At the same time, individual sovereignty - by which I mean the fundamental freedom of each individual enshrined in the charter of the UN and subsequent charters - has been enhanced by a renewed and spreading consciousness of individual rights." He went on to say, significantly: "When we read the charter today, we are more than ever conscious that its aim is to protect individual human beings, not to protect those who abuse them."

If, indeed, the US has evidence that Jamaica, or any other state, is using its security forces to oppress human beings whose rights are protected by international law, it has a moral obligation to use its economic resources to punish us and those other violators. If the Jamaican State is oppressing its people, the US, despite its moral inconsistencies, has a moral duty to withdraw financial support to force our Government to treat the people right. I have no evidence of state-sponsored abuse of citizens requiring the invoking of the Leahy law. But, in principle, there is nothing wrong or inimical to sovereignty rightly conceived if America, using its financial clout, pressures the Jamaican Government, including forcing Jamaican personnel to resign, over human-rights abuses. More of this should be taking place in the interest of oppressed citizens.

This knee-jerk view that America or Europe should mind their own business and keep their noses out of our affairs is not only jaundiced but is contrary to international law and evolving norms. An excellent book which details the evolution of international law and foreign-policy practice, in favour of humanitarianism instead of state sovereignty, is law professor Ruti Teitel's Humanity's Law (2011). Another excellent work I recommend is Human Rights in the Twenty-First Century (2011), edited by the scholar Stefan-Ludwig Hoffmann.

In a world where authoritarian Great Powers such as Russia and China are ideologically tolerant of anti-democratic and repressive regimes, it is important to have America and Europe as counterbalancing forces - with all their hypocrisy - to pressure oppressive, human rights-denying regimes slaughtering and discriminating against their own people. It is, in fact, not 'their people' - we are part of a common humanity with a right to be protected by international norms of human rights.

I want America strong enough to pressure my Jamaican Government not to take away my rights just because I happen to live within its borders. That the state that rescues me from my own oppressive Government is itself an oppressor elsewhere does not lessen my appreciation for its intervention.