Howard Cooke and the new Jamaica 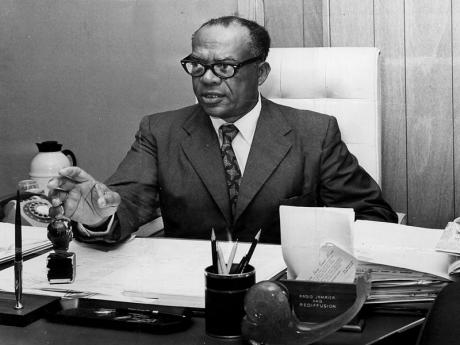 When Howard Cooke entered the world in the little St James sugar-belt free village of Goodwill on November 13, 1915, World War I, the centenary of which is now being commemorated, was three months into its second year. Hostilities had broken out among the European powers of the day towards the end of July 1914, following the assassination of Archduke Franz Ferdinand of Austria and his wife in Sarajevo on June 28. Many young men in the Jamaica colony, including Norman Manley, felt it their patriotic duty to fight for the mother country, and, if needs be, die gloriously on some foreign battlefield.

Dulce et decorum est pro patria mori (sweet and honourable it is to die for the fatherland), which English war Poet Wilfred Owen described as "the old lie". Owen was himself a very late casualty of 'The Great War', getting killed just seven days before armistice on November 11, 1918.

Cooke lived through a century of the creation of the Jamaican State, which may not be so sweet to live in, much more to die for. The wife of the current head of state got into hot water for speaking honestly in response to the murder of her former bodyguard, one among hundreds of citizens murdered each year, that when she got the news, she felt as if she didn't want to be a Jamaican or to be in Jamaica anymore.

Cooke took his last breath wishing, hoping and praying for a kinder, gentler, more loving Jamaica, and had thrown behind this dream the weight of the office of governor general, which he occupied between 1991 and 2006.

Howard Cooke was a 14-year-old youth with only a year left in elementary school before an uncertain future in sugar unless fate rescued him when Marcus Garvey launched his People's Political Party in September 1929, Jamaica's first modern political party, with a bold manifesto for the transformation and development of Jamaica, including a call for "a larger share of self-government".

Cooke was a Garveyite, and in one of the several interviews I did with him, he explained to me his own view on how Marcus Garvey was a product of his time and place.

Cooke was a young man of 23, and fresh out of the Mico Teachers' Training College, which had rescued him from life on the sugar estate when the labour upheavals of 1938 erupted. Teaching, the clergy, and the lower ranks of the colonial civil service (including the police and the post office) were the only means by which a handful of poor black youth could escape their circumstances.

Ever the social activist, the young Cooke was already busily engaged with the Norman Manley-led Jamaica Welfare, formed in 1937 with an endowment from the powerful banana transnational United Fruit Company, when the People's National Party (PNP) was founded the following year with him a founding member from the Jamaica Union of Teachers. The Jamaica Welfare Pioneer Clubs sang at their meetings, The New Jamaica Song, which would resonate with Howard Cooke for all his long life: "We are out to build a new Jamaica ... with Christ our pioneer."

Others will better eulogise Sir Howard for his work in politics, education, the Church, and insurance, and as governor general. I knew him closely and best with respect to his work with Moral Re-Armament. I subsequently interviewed Sir Howard at King's House for a commissioned story for For a Change, the magazine of the British arm of MRA, and later for research on community development in Walkerswood, St Ann, in which both MRA and Jamaica Welfare played starring roles.

By the time Sir Howard was sworn in as governor general on Emancipation Day, at age 76 when most people are deep into retirement, his real passion was for the spiritual revival of his beloved country for a kinder, gentler new Jamaica. And the Church and MRA were to be his vehicles out of King's House. Ironically, the front page of The Gleaner the following day reporting his installation as governor general under the headline, 'A Time for Unity - New GG urges unselfishness, love', carried the side bar story, 'More than 416 violent deaths so far'.

Sir Howard was keenly conscious of, and very proud of the strides the country had made in education, health, housing, economic diversification, and in social legislation, although I think he was not sufficiently straightforward about the downsides created by the country's politics and, particularly, his party politics creating much of the mess that he pined to see cleaned up.

The Bromley Estate in Walkerswood had become something of a centre for MRA in Jamaica, and among those drawn to Bromley through the Moral Re-Armament connection was Howard Cooke, then a young politician working with Norman Manley for the transformation of Jamaican society.

The Bromley owners, going back to Sir John Pringle who had come to the colony as a young doctor from Scotland, were different from the old white plantocracy which he intensely disliked as a young man. They had a peculiar interest in the growth and development of non-white Jamaicans.

Howard Cooke became affiliated with MRA through the Barnett Estate owner, Peter Kerr-Jarrett, in St James. Kerr-Jarrett, who was despised by the young, egalitarian, firebrand PNP politician as a white plantocrat, had accepted the MRA principles of peace and reconciliation and shared them.

Cooke used every speaking opportunity to thunder against the "white plantocracy of vested interests". Kerr-Jarrett quietly struck back by inviting the firebrand politician to his home where he gently introduced him to Moral Re-Armament.

Later on, when he was a member of the West Indies Federal Parliament, Cooke journeyed to the MRA centre at Macinac in Michigan, United States, at Kerr-Jarrett's invitation, although he was not interested in going to the United States, which he saw as a wicked oppressor of black people. In three days, Kerr-Jarrett obtained the necessary visa and the reluctant Howard Cooke was off to a life-changing encounter with MRA, paid for by his former antagonist. Cooke entered a world of reconciliation and conflict resolution.

After Kerr-Jarrett died, the centre of influence for MRA in Jamaica shifted from Montego Bay to Bromley. Cooke himself, as a participant there, found "total acceptance", in discussions with a wide cross section of people across political, religious and racial divides, about the development of the country. "You could feel that they [the Bromley family] had a desire to change the community," Sir Howard recalls with great feeling. "They wanted a working community for peace and harmony, and prosperity." They brought people who shared that vision from all over the world to Bromley.

"I now understand clearly," Sir Howard said, "you must have a religious-philosophical background, spirituality, for true development. When you got to Bromley, and this is important," he continued, "there was a spirituality in the atmosphere that was different, the spirit of genuine love, and genuine effort to bring everything that was good to the total community."

Sir Howard underscored the significant role played by white and brown wealth in backing several programmes for the development of Jamaicans, including Garvey's movement (which Garvey himself acknowledged), the PNP, Jamaica Welfare, and Walkerswood community development. Sir Howard also underscored the role the Church has played.

For him, Jamaica is a unique country with a rich history and a leadership role in the world. The former schoolmaster felt we could teach the world about unity, as Norman Manley thought. We could offer our spiritual strength and understanding. This small country has great strengths. We are not sufficiently highlighting them and telling the world about them, he lamented.

Sir Howard wished and longed for the writing of simple, popular history documenting the social and economic evolution which has taken place to instill in the Jamaican people pride in our past and pride in ourselves. That vision must now be carried by someone else. The school bell has rung. The trumpet has sounded.