Russia, Ukraine and plane crash: it's going to get uglier 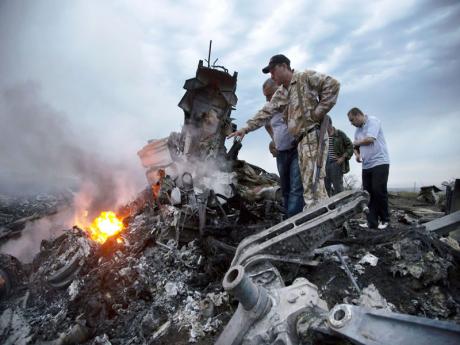 People inspect the crash site of a passenger plane near the village of Hrabove, Ukraine, last Thursday. The downing of the jet could prove to be a turning point in the country's conflict with Russia. But which way it turns depends mainly on who carried out the attack and how convincingly it can be proven to the world. - AP

"... And once the TAR (Target Acquisition Radar) has lock-on, this light will go green. Then just push this button here, and the rest's automatic. Good luck! Oh, and make sure nobody's standing behind the missile when you launch."

Maybe the crew who launched the missile that brought down Malaysian Airlines Flight MH17 over eastern Ukraine last Thursday afternoon were trained professionals, but it seems unlikely. That crew (or somebody else) was good enough to down three Ukrainian Air Force planes over the rebel-held zone in the past week, but they weren't good enough to tell the difference between a military aircraft and a civilian airliner.

The Ukrainian planes were smallish aircraft flying low in a combat zone; the huge Malaysian Airlines Boeing 777 was flying straight and steady at 10,000 metres (33,000 feet). A fully trained operator would know the difference in an instant. Somebody who had just had a crash course in firing Buk missiles (two tracked vehicles and a lot of electronics) might not. So 298 people died.

There are two questions to answer here. One is: Who did it? The Ukrainian government, the pro-Russian rebels and the Russian Federation have all denied responsibility. The other is: What happens if, despite their denials, the rebels and/or the Russians themselves are to blame? Is this horrible event a game-changer?

Who did it is actually pretty obvious. At least one Buk launch team was spotted by an Associated Press reporter in the rebel-held zone on Wednesday, and there may have been more. The Russians have been trying to deny the airspace over the combat zone to the Ukrainians so that their army has to do all its fighting without air support and suffers increased casualties. Six Ukrainian planes have been shot down in the past six weeks.

The Ukrainian government says it has no surface-to-air missiles in the area, and it is probably telling the truth. With one possible exception, there have been no reports of Russian planes overflying the region, so anti-air defences were not needed.

The really damning evidence, however, is on the social media sites. First, there is a post on a top rebel commander's site, just at the time MH17 went down, claiming to have downed a Ukrainian transport plane. Within hours, that post was deleted. Then the Ukrainian Security Service (SBU) posted intercepted telephone conversations between rebel commanders on YouTube.

'Demon', commanding the rebel troops who are the first to the crash site, reports: "Cossacks from the Chernunkhino checkpoint shot down the plane ... . They found the first body. It's a civilian." "Were there many people?" asks his superior, nicknamed 'Greek'. "A fkload," replies Demon. "The debris rained right into the yards."

"Any weapons there?" asks Greek. "None at all. Civilian things. Medical stuff, towels, toilet paper," says Demon. "Any documents?" asks Greek. And Demon, finally realising what must have happened, replies: "Yes. From an Indonesian student. From Thompson University." And he curses again.

It's probably not Thompson University, which is an entirely online institution in the United States. It's almost certainly Thompson Rivers University, in Kamloops, British Columbia, Canada, which has a student exchange agreement with the International Islamic Education Council (IIEC) in Indonesia.

And there's no way, without access to the crash site and with only a few hours to do the job, that the Ukrainian intelligence service could have come up with that kind of detail to put into a fake recording. It's genuine. The rebels did it.

Russia didn't want the Cossacks at Chernunkhino to shoot down a civilian airliner, but it has been giving the rebels heavy weapons while strenuously denying it. It has been caught red-handed, and hundreds have died. This is indeed a game-changer, but in which direction?

One option would be for Moscow to admit it, apologise wholeheartedly, and abandon its clients in eastern Ukraine. That is unlikely to happen. As President Vladimir Putin said on Thursday, "This tragedy would not have occurred if there were peace in that country, or in any case, if hostilities had not resumed in southeast Ukraine. And certainly, the government over whose territory it occurred is responsible for this terrible tragedy."

In other words, yeah, we gave the rebels the weapons, and they used them to shoot down the airliner, but the whole thing wouldn't have happened if the Ukrainian government had just given in to the rebels. So it's really Kiev's fault, not ours.

The signs are clear: Russia is going to brazen it out, and go on supplying the separatist rebels with weapons. The Western Europeans have been trying to look the other way (although the United States did impose some extra sanctions this week), but they can't look away after this. Western sanctions against Russia are going to go up quickly and steeply now. It's already ugly, and it's going to get even uglier.

Gwynne Dyer is an independent journalist whose articles on world affairs are published in 45 countries. Email feedback to columns@gleanerjm.com.