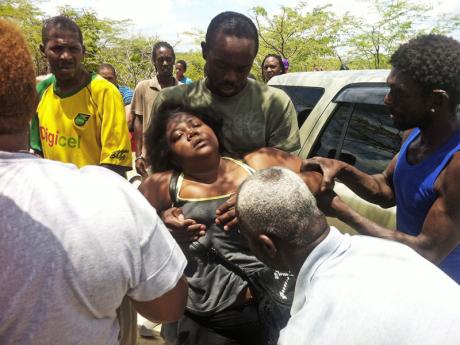 A mother gets assistance from onlookers after receiving news that the body of her son, Omari Sterling, had been found in bushes in Trelawny last week. 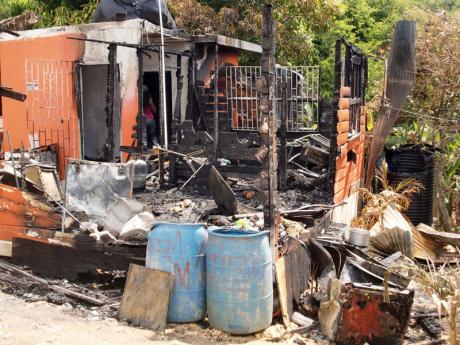 What's left of the house where three children lost their lives in a fire last Friday.
1
2

The deaths of five children in western Jamaica last week has again led to concerns that Jamaica is not doing enough to protect the young ones.

"Summer is becoming a very dangerous time for children," lamented Betty Ann Blaine of the group Hear the Children's Cry.

"In fact, all school vacations are high-risk periods for youngsters, but summer most of all because of the long stretch of holiday time involved. Children are out of school, they are at home all day, and there is less supervision, sometimes none. Many parents have to work and are not at home during the days.

"Unfortunately, the paedophiles and other criminals know this, and are even more active during vacations. Sadly, there is a higher level of incidents against children during school holidays," added Blaine, after the bodies of 10-year-old Mallica Mitchell and 13-year-old Omari Sterling were found in bushes in Trelawny last Tuesday.

The Child Development Agency (CDA) also called on parents to exercise greater vigilance in caring for and protecting their children, especially during the summer holidays.

Expressing deep concern about the latest incidents in which five children have died tragically, Rosalee Gage-Grey, CEO of the CDA, said parents and guardians must ensure that their children are protected from accidents as well as deliberate acts of violence.

"Parents must ensure that children are properly supervised at all times and that they are left in the care of a responsible adult," said Gage-Grey.

She also called on members of the communities to play their part by reporting any known or suspected cases of child abuse or neglect.

"If you know that your neighbours have left their children at home unsupervised, you need to call the police or the CDA immediately, and make a report to the Office of the Children's Registry," added Gage-Grey.

"It is extremely sad to see the loss of such young lives due to the reckless behaviour of the very person responsible for caring and protecting them," declared Greg Smith, registrar at the Office of the Children's Registry.

"Too many persons continue to take it for granted that children can be left to take care of each other while their parents are away from home engaging in other activities. This careless practice needs to stop and those who are found in breach will be charged by the police for neglect," warned Smith.

In Negril, Westmoreland, yesterday the pain of their loss was still fresh in the minds of friends and relatives of the three children who perished in a fire Friday morning.

"Them very quiet, obedient - not children of disobedience," Carlton Arthurs said of his nieces, 14-year-old Brittany Boning and 11-year-old Beyonce Leslie, and their eight-year-old cousin Xavier McKenzie, who died in the fire which started at approximately 6:30 a.m.

"She was a very educated little girl, and everything for her go down in the hole," Arthurs said of Brittany, who was a student of Rhodes Hall High School.

The children reportedly died of smoke inhalation after the two-apartment board and concrete dwelling they had called home went up in flames. Their bodies were later found in a bathtub inside the house.

The children's mother, who was not home at the time of the fire, subsequently collapsed on receiving the news and was rushed to the Savanna-la-Mar Hospital.

Danay Douglas, a close friend and former schoolmate of Brittany, remembered her as a jovial child.

"We grew up together, went to the same school, and she was quiet. She was fun to be around," said young Douglas.

Senior deputy superintendent of the Westmoreland Fire Division, Morine Thompson, told The Sunday Gleaner that according to reports, the children's mother left the house shortly before the fire started.

"The information we received is that shortly before the fire, the two adults who were at the house rode out on a bike - one to work, and one to the gym," Thompson added. "There was nobody at the house to assist … . They lived in a little area by themselves."

Thompson said while the cause of the fire was not determined up to yesterday, investigators are hoping to question the mother of the children, who was still in hospital yesterday.