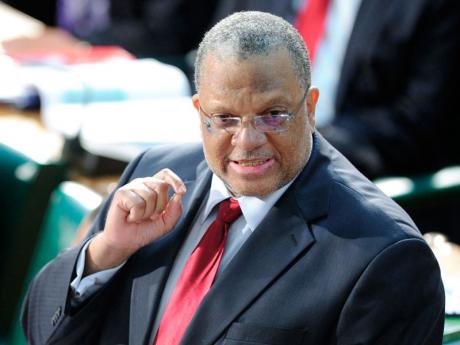 The bill, which was laid by Finance Minister Dr Peter Phillips, is part of an effort to clean up the tax system.

Employers who illegally deduct the portion of education tax from their workers salary, which they are liable to pay, could face up to 10 years in prison if Parliament approves amendments to the Education Tax Act, which was laid in the House of Representatives last Tuesday.

The bill, which was laid by Finance Minister Dr Peter Phillips, is part of an effort to clean up the tax system and make it easier for the State to collect resources due to it.

With respect to the education tax, the Government proposes to amend the law to reflect a $2-million fine or one-year prison term in default of payment, where an employer, as a first offence, deducts from the emoluments of a person employed by him, or otherwise recover from such person, the portion of the tax payable by the employer.

The Education Tax Act imposes tax on the emoluments of employees of 2.25 per cent while the employer is to pay 3.5 per cent. But there have been reports of employers deducting the full amount from the salaries of their employees.

Based on the bill, in the case of a second or subsequent offence, the employer, if convicted, faces up to $5 million in fine and five years in prison in default of payment.

Where the conviction takes place in a Circuit Court, the proposed penalty is a fine or up to 10 years in jail.

At present, the law allows for a fine not exceeding $5,000, and in default of payment, to imprisonment with or without hard labour for a term not exceeding 12 months.

The new bill is also proposing increased penalties for the responsible officer of a body corporate which fails to, within 15 days after the end of each month, notify the collector of taxes of any outstanding balances of education tax payable by the body corporate.

The bill is also proposing that if an employer has failed, or has neglected to pay education tax or comply with the requirements either of the law or the regulations relating to the payment and collection of education tax and the furnishing of prescribed information, he shall be liable, on summary conviction in a Resident Magistrate's Court, to pay any amount outstanding, and in addition a fine up to $2 million or three times the amount of education tax which is unpaid, whichever is the greater.

As it relates to late filing of education tax, the new bill is proposing a $5,000 per month fine for every month that the filing is late.

Meanwhile, revised penalty schemes have also been proposed for the Income Tax Act.

For example, no longer will the penalty for submitting a false certificate in breach of the arm's length principle be $20,000 or 12 months in prison. The bill is proposing that the fine be raised to $2 million.

The arm's length principle applies where a transaction is carried out between connected persons, the effect of which would be to reduce the amount of tax payable.