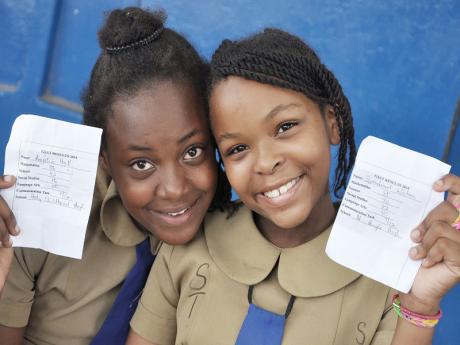 A grade-six classroom exclusive to boys and specialised teaching designed for them are just two of the measures to be introduced by some primary schools in the next school year as they try to reverse the trend of girls out-performing boys in the Grade Six Achievement Test (GSAT).

The latest GSAT results have shown a continuation of the trend where girls at the primary level are outperforming the boys in every subject area.

Figures released by the Ministry of Education (MOE) show that the average grades received by boys were lower than the girls, in some instances by as much as seven percentage points.

This has prompted principal of the Franklin Town Primary School, Leroy Smith, to create a boys-specific programme for the next school year.

"Come September, I'm going to separate the boys from the girls to have a boys-only grade- six class, so that we can target them a lot better, because we understand that boys like to touch and create things.

"We are trying to get some gadgets for them to work with. Boys don't want to sit down for a lecture, but if you give them more responsibilities and rewards, they will mature and then you can capture their interests," Smith told The Sunday Gleaner.

In the neighbouring community, Dr Margareth Bailey, principal of the Rollington Town Primary School, is grappling with how to reduce the daylight between the grades of the girls and the boys in the classrooms.

She agrees with Education Minister Ronald Thwaites that teachers needed to adjust their methods to reach the boys.

"We do need to give them more hands-on learning aids and we need to understand how they learn from very early, because if you can identify their learning style and teach them according to that learning style you will see improvements," said Bailey as she also decried the lack of male mentors available in primary schools.

"Many of these boys come from female-headed households, don't have male mentors, and most teachers are female and it's not all the time we can act like a man so we need more male role models. Right now we have a staff of 35 and only three men, and none of them is in the classroom," said Bailey.

That shortage of men in the classrooms is a problem also pointed to by Thwaites as he pushes to improve the performance of the boys.

"This is not a criticism of the thousands of women who work in our primary schools and do wonders, but ... boys need much more sensitive male mentoring, they need to have men of achievement and grace that they can look up to and say I want to be like that. I do wish we could attract more men into the field, but the fact is we don't have a gender choice."

According to education ministry statistics, in 2012 there were 10,916 female teachers working in the primary education sector across the island compared to 1,634 male teachers.

Thwaites also agrees that teachers need to rethink how they relate to the boys.

"Boys need applied learning, they are more interested in doing things rather than listening to things, so the more practical or applied the lessons are, the more we can improve their love of learning," said Thwaites.

While accepting that boys' developmental threshold is different from those of girls, Thwaites argued that teachers needed to understand these differences and make simple adjustments to their methods to get the interest of boys.

"From building shapes for the instruction of mathematics to recounting their experiences on the football field in English, these are the things that could improve their performances, but they have to start from the earliest levels."

For this year, while there was a decline in the performance of all students in the subject of mathematics, boys averaged almost five percentage points less than girls. The average grade received by girls in mathematics this year was 62.4% while the average grade for boys was 57.8%.

In language arts, boys averaged 58.9% while the girls averaged 65.9%. For the subjects science, social studies and communication tasks, girls averaged between three and six percentage points above boys.