Golden years for a golden couple 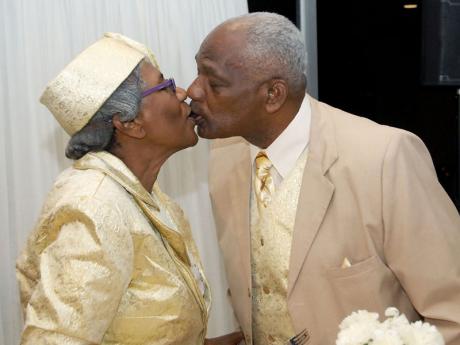 The couple, very much in love, sharing a slice of cake. - Colin Hamilton/Freelance Photographer 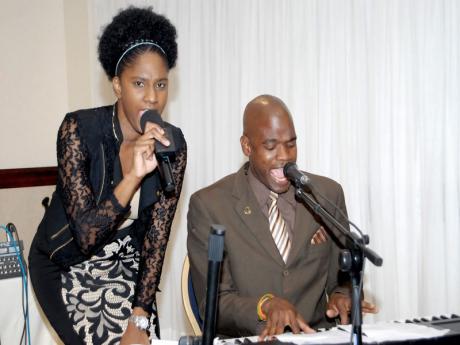 The couple's daughter, Janet Rankine-Henry, and son, Windell Jr, sing a tribute to their parents.
1
2

It has been 50 years since Bishop Windell Rankine and his wife as well as partner in ministry, Reverend Dorothy Rankine, said 'til death do us part'. But who would have guessed that this journey that actually started with 'no way' would lead to 'I do', and last so long?

Before Windell Rankine was a pastor, when Dorothy was just a young member of the church, he prayed to the Lord for a wife and he saw her, the face of his bride, in a vision. However, he did not see the face in church until he laid eyes on Dorothy. Unfortunately, Dorothy was not convinced, and made it clear that she had no intention of marrying him. In fact, her words were, "If you are the last man available on earth, I would die unmarried." Well, Dorothy was wrong. Last Friday July 11, the couple celebrated their golden anniversary.

The union produced six children, seven biological grandchildren, and one step grandchild. The children and their father planned a surprise for their beloved Dorothy at theTalk of the Town at The Jamaica Pegasus hotel. The room was decorated in gold and white to symbolise the golden anniversary. After much sneaking around, they invited close family members and some devout members of their congregation. Though they tried their best to keep everything a secret, Reverend Rankine had a hint that something was going on, but she was oblivious to the true grandeur of the plans.

The couple entered the surprise celebrations dressed in white, but it was after-all their golden anniversary, and the children and her husband had other plans. They had secretly commissioned a golden outfit for her, which she went and changed into before the celebrations got into full swing.

Every one who took to the microphone to pay tribute to the couple spoke of their love for each other, especially how much Bishop Rankine adored his wife. After 50 years that love was evident as the couple looked adoringly in each other's eyes as if they were newly weds. Among the great memories of the couple's life together, was the parrot story. It was a rule in the Rankine's household that his wife should always get the first kiss as soon as Bishop Rankine entered the house before he spoke to any one else. But on one particular day, their parrot Pretty greeted him as soon as he entered the house, and he responded taking his time to greet Pretty while his wife watched. When he went in for his customary kiss, his wife refused pointing out that he spoke to Pretty first. So he left the house and drove around the neighbourhood. When he returned and Pretty greeted him, he shunned the bird saying, "shut up Pretty, because of you I didn't get to kiss my wife." He then went in and kissed his wife.

Marriage is a journey that many say is not easy, but the past 50 years did not seem that difficult for the Rankine's. Even when guest speaker Rev Dr G Oliver Barnes stated that marriage can be difficult, you heard Dorothy in the background saying, "Not for us."

Bishop Rankine explained that he built his marriage on four pillars- 'love, respect, trust and submission one to another'.

Dorothy sang 'The Next Step' by Jack Campbell to her husband, before they cut their cake. There was no renewal of vows as Dorothy puts it, "when we said it the first time we meant it. There is nothing to renew because it is always new."

At the end of the night, one thing was certain, if they had 50 more years left on this earth Dorothy and Windell would spend want to spend it with no one else but each other.