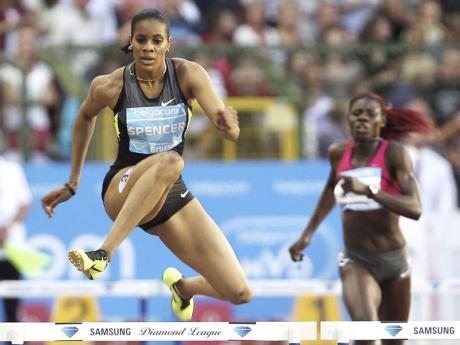 Kaliese Spencer won her second race in as many days yesterday when she took the 400 metres hurdles at the Madrid World Challenge meet in a relatively pedestrian 55.08 seconds.

Stephanie McPherson also won, claiming the 400 metres at the meet where a number of other Jamaicans delivered solid performances a week ahead of the start of the Commonwealth Games in Glasgow, Scotland.

Spencer, who won her fourth Diamond League race of the season on Friday in Monaco, ran out an easy winner in her event, finishing well ahead of the Ukraine's Anna Titimets 55.45 and Tiffany Williams of the USA, 55.81. Spencer's countrywoman Nickeisha Wilson was fourth in 56.34 while Janieve Russell was seventh in 58.58.

McPherson was equally dominant in her event which she won in 50.45, more than a second ahead of Indira Terrero of Spain 51.65 and her MVP and Jamaica teammate Christine Day 51.72. Shericka Williams, who has been struggling in her return from injury, continues to improve with a 51.77 clocking for fifth.

The women's 100 metres was an exciting affair with American Barbara Pierre being declared the winner over Kerron Stewart even though both athletes were credited with the same time, a wind of 11.08 (2.6m/s). Not far behind was the USA's Lakeisha Lawson with 11.16s.

O'dayne Richards continues to demonstrate solid throwing form this season as he was second in the men's shot put with a mark of 20.33m behind American Ryan Whiting 20.91m.

Damar Forbes was a disappointing 10th in the men's long jump with a leap of 7.58m. The event was won by Spain's Eusebio Caceres (8.16m).

Over in Belgium, former 100-metre world record holder Asafa Powell, in only his second race of the season, showed signs of improvement when he clocked 10.15 for second in the men's 100 metres at the KBC NACHT meet in Belgium. Powell, who is now being coached by his brother Donovan, was just behind up-and-coming American sprinter Marvin Bracy 10.13 while Trinidad's Keston Bledman was third in 10.22.