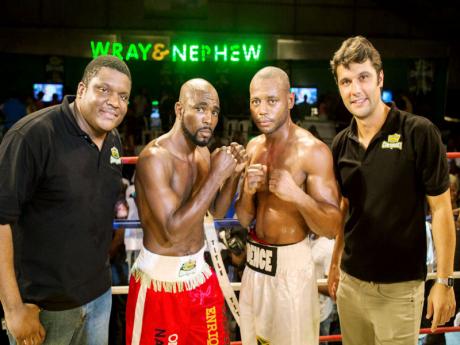 Non-stop aggression was the formula that Jamaica's Sakima Mullings used to take out four opponents in succession and earn the right to be named Wray & Nephew Welterweight Contender 2014 at the National Indoor Sports Centre on July 9.

His seventh-round technical knockout victory over Tsetsi Davis in the final was easily the best performance in the four-year life of the Contender championships, and there is still a buzz in boxing circles about the fight and the series, nearly two-weeks after the end of competition. The series started on March 19 and ended on July 9, and was broadcast live on TVJ each Wednesday night.

A bold move by the promoters, MJK Productions, to bring in seven boxers from Guyana, Trinidad and Tobago, and Barbados to participate in the competition this year paid rich dividends. These boxers added a certain edge to the series by providing exciting competition for the nine Jamaican boxers who participated, and gave local boxing fans the opportunity to cheer for the local boxers.

The seeding of the boxers was almost perfect, and ended up with Mullings, the No. 1 seeded boxer, meeting Davis, the boxer seeded No. 3. It was Davis who made the change in the final standings, as he toppled the No. 2 seeded boxer, Howard Eastman from Guyana, in the semi-finals, thereby making it to the finals for the second year in succession.

Davis was also a finalist in 2013 when the competition was for middleweights, but in the end he lost by split decision to Devon Moncrieffe. He came back confidently this year, and declared that no one would stop him this time, but the blazing fists of Mullings made him the bridesmaid once more. He went down fighting, however, and earned the respect of his opponent, Mullings, who described him as "a very good opponent who brought his A Game to the contest and made the final as exciting as it was".

Davis reached the final with victories on points over Derek Richmond and Howard Eastman, two of the overseas boxers, and Ramel Lewis from Jamaica. Mullings, on the other hand, blazed a trail of destruction, with a knockout victory over Derek Richmond, and two technical knockout victories over Richard Holmes and Donovan Campbell, who was the welterweight champion in 2011.

The finals produced virtually non-stop action throughout, and spectators enjoyed the action from the opening bell to the last, and cheered themselves hoarse in the process. There were two particularly dramatic moments in the fight, one in the fifth round, and the other at the end in round seven.

In round five, Davis caught Mullings with a right hand to the jaw, and he fell into the ropes, and his knees touched the canvas. It should have been ruled a knockdown, but referee Eion Jardine from Guyana, who did an otherwise good job throughout the competition, missed that one. Tsetsi Davis, in the meantime, had retreated to a neutral corner with his back turned to the referee, thinking that Mullings was receiving the mandatory count.

Confusion reigned for a while, but the bout was eventually restarted, and it was more non-stop action into the seventh round. With only one second left in the round, one of Davis' seconds entered the ring and called a halt to the bruising contest. Mullings was declared the winner by technical knockout, and Wray & Nephew Contender 2014. His record is now an impressive 16-1 with 11 KO's.

In interviews afterwards, Mullings praised his team and said that he had accomplished his goal of winning all his fights inside the distance. He paid tribute to Davis, whom he deemed "a tough opponent who gave me a great fight". For him, it was "mission accomplished", and his next goal, he said, is to seek a world title in his weight class. He will be defending his World Boxing Council, Caribbean Boxing Federation title within the next three months, he said, after which his other plans will kick into high gear.

For Davis, it is the end of his aspirations to be Contender champion, after two near misses. He told The Sunday Gleaner that he "totally disagreed with his corner stopping the fight, especially with only one second left in round seven. I was not done, and could have made it to round 10, and as you know, the fight was dead even at that time."

Davis said that he would not enter the Contender series again, but seek some quality fights during 2014-15. At age 37, and with a 12-4 record, he thinks that he still has some good boxing left in him and hopes to be very active.

The series was well promoted, and high praise has gone to the promoter, the name sponsor Wray & Nephew and associate sponsors TVJ and Schweppes.