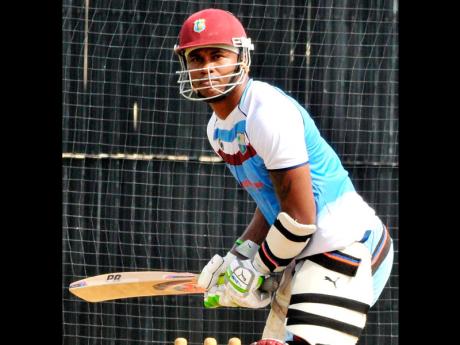 Marlon Samuels stroked a classy half-century but was outshone by an equally fine one from Shoaib Malik, as Barbados Tridents beat Antigua Hawksbills by five wickets to post their first win in the new Caribbean Premier League campaign.

The right-handed Samuels's high quality 84 off 54 deliveries propelled the hosts up to 172 for six off their 20 overs after they were sent in at the Vivian Richards Cricket Ground.

However, Shoaib responded with an intelligent 72 off 50 balls, to help guide the Tridents to a much welcome victory, with four balls left in the contest.

The Pakistani right-hander was supported by captain Kieron Pollard and seasoned opener Dwayne Smith who both got 21, while Jason Holder finished unbeaten on 19 from nine balls.

Holder struck two sixes - the last of which was a straight hit off exciting left-arm quick Sheldon Cottrell which ended the game emphatically.

Tridents were given a flying start by Smith and Shane Dowrich, the Barbadian pair adding 31 off just 15 balls for the first wicket. Dowrich, who made 17, cracked boundaries off the opener over from Cottrell and Smith added a six off the last ball, as the over bled 16 runs.

In the next over from Samuels, Dowrich cleared long off but then perished in the following over, bowled by Cottrell after missing a swing.

Tridents benefited from a series of small partnerships after Shoaib arrived to hold the innings together in a superb knock.

Smith struck two fours and a six off 13 balls before he was brilliantly caught at third man by a diving Miguel Cummins off seamer Carlos Brathwaite, who was again the best bowler with two for 37.

When Mendis, frustrated with the lack of scoring opportunities, scooped a simple catch to Cummins at mid-off off left-arm spinner Brad Hogg, the Tridents were 97 for three in the 12th over and in need of a lift.

Shoaib came to the fore, striking four fours and four sixes and dominating his partnership with Pollard.