Lessons for Jamaica, from Brazil 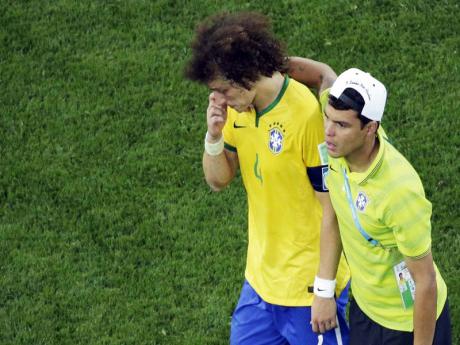 By Tony Becca, ON THE BOUNDARY

No, they were not knocked out: the Brazilians were humbled and humiliated. They were beaten 7-1 by Germany, and they got their lone goal in the dying seconds of the game.

The mood around Kingston, around Jamaica, was similar to that of a wake.

Did Brazil deserve it? No, not really, and not so a country like Brazil. The Jamaicans should have seen it coming, however, not so much the scoreline but more the result.

Brazil were not a good team, they had two world-class players in Neymar and Thiago Silva, one a playmaker, one of the very best in the world and a goalscorer and the other a defender and a motivator, and when they were both ruled out of the game, the team were in shambles. They had no one to which to turn.

And even the Brazilian fans realised that.

There is a lot of work to be done in Brazil to polish their reputation as football's holy ground, but as sure as the night follows the day, they will do it, and quickly at that.

My bet is that Jamaica will do nothing they have not been doing over the years. They will look at Brazil's defeat and they will not see what really caused it, or what went a far way towards the result.

Brazil have been playing with disaster from the 1970s, after winning three times in four attempts.

While it is true they have won it on two other occasions through the efforts of a few stars, like Romario and Bebeto, Ronaldo and Ronaldino, Brazil have not been the Brazil of old. They have not been playing like Brazilians. They have become too much European, and they have almost lost all of the Sambo touch, the beautiful play that the world fell in love with.

Brazilians, maybe because of money, ply their trade in Europe year in and year out as professionals. They play in different conditions, they play under many different European coaches, as employees they are forced to comply with changes in their styles, tactics, and formation, and soon the Brazilian way is lost.

Brazil's Sports Minister, Aldo Rebelo, blamed it on the players playing in Europe at an early age. He calls it, "football colonialism by the rich teams in Europe".

The Brazilian European pros gather once ever so often to represent Brazil. They try to reproduce the play they once knew, they play a match, or a tournament, some with success and some without success, and then, win or lose, they get on to an airplane and go back from whence they come.

There is no tomorrow where the players can see the people's humiliation when they lose badly, or to see their hurt following a disaster.

Those are the problems, and they are not all.

Most times the Brazilian team is 90 per cent from Europe, and the coach, a Brazilian, look to them, even in those times when they have passed their best.

Zico, a Brazilian star, blamed the team's failure on "poor administration, a lack of structure, and a vacuum of leadership".

Somehow, Brazil, a country of some 200 million people, must find a way to deal with the problems, the problem of players earning money, still representing Brazil, and still playing top class and beautiful football.

For Jamaica, if they hope to get back to the World Cup finals they will have to change direction. They will have to drop the idea of roaming the world to find Jamaicans, or anyone with a connection to Jamaica, to represent Jamaica.

Representing Jamaica is a serious business, and apart from being gifted, one must be committed to Jamaica. Jamaica should not search for them and then plead with them to come and play

They should want to come to Jamaica, and of their own free will.

Jamaica need to plan to play good football, from as early as possible, from age five, if possible, and they need good coaches who spend time on the job and with the players.

They need a broad base and a good league played on good fields, they need administrators who are good for the game, and they need a group of players who are committed to train and to practise.

They need to play hard, to run for two hours at a time, until the football becomes a part of them, until they can talk to it. They need to build a good football team, not to look for one.

Against Brazil, if not against Argentina, whose selection followed Brazil's closely, Germany, whose players played mostly in Germany with six of the starting 11 coming from Bayern Munich, played as if they were talking to the ball.