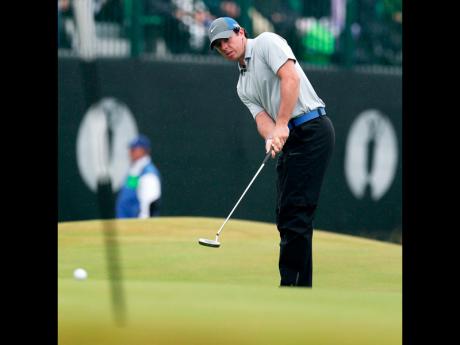 Rory McIlroy knows how quickly a big lead can slip away, so he wasn't satisfied by simply restoring it yesterday in the British Open.

And when he reached the final hole at Royal Liverpool, he delivered his best two swings of the day.

McIlroy launched a 5-iron from 239 yards in the 18th fairway at Royal Liverpool, stood back to admire the flight and then crouched until the ball rolled up to within 10 feet of the flag for his second eagle in the last three holes.

Five holes earlier, he was tied for the lead.

McIlroy left the course with a 4-under 68 and a six-shot lead, the largest 54-hole margin at The Open since Tiger Woods led by six at St Andrews in 2000.

That final putt for eagle had the feel of a knockout punch. No one has ever lost a six-shot lead in the 121 years that The Open has been contested over 72 holes.