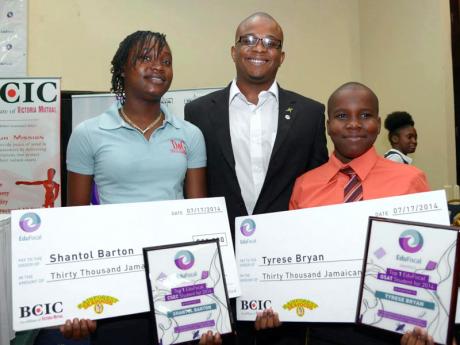 Gordon Swaby, creator of the online learning platform, www.edufocal.com, said the students who received the awards last Thursday represent the change that his company is looking to bring to the education system.

Swaby said that because of the gamification technology used on his website, several students who would have otherwise been lagging behind their peers are now tuned into EduFocal and excelling.

This view was shared by many of the awardees who made it clear they had absolutely no interest in academics before they discovered EduFocal.

The top GSAT student in the group, Tyrese Bryan, said he was grateful for having discovered EduFocal at a time when he needed assistance the most.

"It has been an awesome experience. It helped me to improve in my schoolwork and, as a result, I was successful in my GSAT exam and got into the school of my choice, which is St Mary High," Bryan said.

For Barton, her experience using EduFocal has been nothing but positive and she encouraged other students to make use of the learning website.

Keynote speaker at the awards ceremony, Professor Errol Morrison, director general of the National Commission on Science and Technology, applauded Swaby for taking the initiative to create EduFocal.

He said more such innovations were needed and encouraged Swaby to expand EduFocal beyond just the Internet and quickly move to develop a mobile version of the learning platform.

Swaby said his immediate plans for expansion will see EduFocal being launched in Trinidad and Tobago come September and students will soon be able to prepare for the Scholastic Aptitude Test, the United States-standardised college admissions exam.