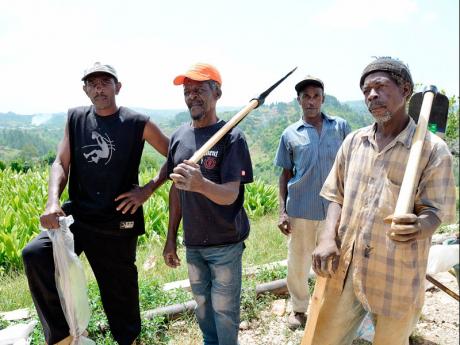 From left: Farmers Errol Christopher, Felix Robinson, Michael Dale and Kenneth Robinson are ready for work but the ongoing drought is a cause for concern. They are from George North and surrounding communities on the Manchester-Clarendon border. Ian Allen/Staff Photographer

As the effect of months of no rainfall continue to impact the island, farmers in George North, Cobbla, Santa Hill and Spring Ground in Manchester, are also reeling. But unlike their counterparts in Portland and St Elizabeth, who say they understand Government's decision to import some vegetables, these seasoned men of the soil also want something to be done to compensate them for their losses.

Irish potato is the main crop planted in these areas and for Felix Robinson, it's the first time he has experienced such a severe drought. "I planted some Irish potatoes in April but I have lost it all. I get back only some very fine (small) seeds to plant, nothing to sell and I cannot plant back anything for now because the time is too dry," he told The Gleaner when our team visited the area last week.

Michael Dale, of Cobbla, plants yam, banana and plantain, but he has lost his entire crop. He said the heat burnt most of it and moths ate the rest.

"I have 180 hills of yam and I think I might only reap half of it," he said, his voice tinged with despair.

Basil Simpson, from Santa Hill, said he planted Irish potatoes, ironically, at a section of his community called Water Lane, but for the first in a long time, he lost all four bags.

"Just like Felix, mi get pure likkle (little) seed. My yam take a beating, too, and now, it just a spring again," he told The Gleaner.

Although Errol Christopher planted both yam and sorrel, he is worried that he cannot transplant his sorrel suckers because it is just too hot.

"They will die if I do that now. I don't have any water to give them. Last year this time, I had already transplanted my sorrel. My yam get a setback, too, and the yield will be small. I can't weed it because the grass is holding the little moisture that's left moisture in it. I want some rain to come quick," he said.

It is a similar tale for Kenneth Robinson, who planted tomato and cabbage and lost both crops.

"The tomato dem dry up just before time to bear and mi was getting ready to reap the cabbage, but it dry up before time. Mi never see nutten like this," Robinson said.

"I plant some bananas and plantain and yams, but my yam is being held back by the drought," he said.

The situation is grave. Some experienced farmers say they know things are bad when the leaves of the deeply rooted breadfruit trees in some parts of the island have started to wither. The crops this year might be non-existent, but these farmers said they will plant again next year. Meanwhile, they pray for the rain.