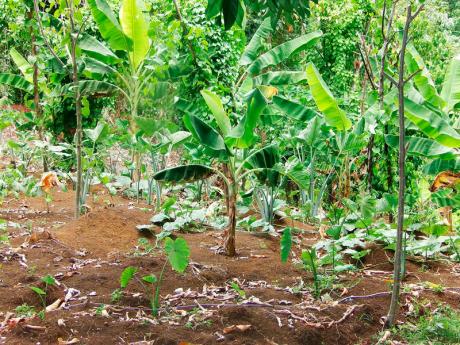 Some of the struggling banana plants on a farm at Stony Hill in Portland.Photo by gareth davis

The continuous drought is creating havoc in the lives of east Portland farmers who have suffered heavy crop losses and are now losing their livestock.

The ongoing dry spell, considered to be the worst in recent times, is close to crisis level, and according to former Portland parish manager of the Rural Agricultural Development Authority, Ridley Badresingh, unless it rains soon, farmers could suffer a 100 per cent loss of crops.

"Many of our crops have simply dried up," said Badresingh.

He added: "I am a ginger farmer, and I forced myself to plant a crop recently, as the soil was already prepared, but it was too hot for planting. It simply means that reaping has been set back for approximately four months, and that is dependent on the rains," he said.

Badresingh continued: "My bananas and plantains have suffered the worst, as the tree trunks have broken in half as a result of the dry spell. The peppers, cabbage, pak choi, tomato and pumpkin have simply dried up, and those that are putting up a fight are slowly withering away."

Badresingh said it is anybody's guess what will happen if it does not rain soon as yams, cocoa, and dasheen are also suffering from the intense heat. The month of May, which is a traditional rainy month for Portland, failed to produce any showers.

A somewhat similar situation exists with livestock farmer Kenneth Rowe of Hector's River, who is finding it extremely difficult to adequately provide grass and other shrubbery for his herd of goats, as vegetation has either dried up or is been exhausted.

"I am a small farmer and I have 54 goats, comprising rams, heifers, and kids, which are allowed to roam on a three-acre property, which once had lush vegetation. Now, since there is no rain, the area of vegetation, which was easily replenished in about three weeks, is now bare. Grass is drying up, and I am running out of feeding ground for my herd. I would welcome even a short five-minute sprinkle right now."