'Worse days are ahead' 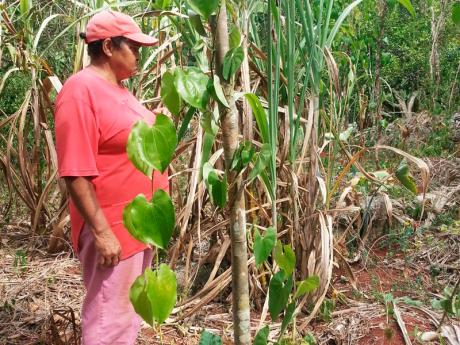 Philomena Preddie examines the few crops trying to survive on what she calls her 'non-existent' farm. - PHOTO BY TAMARA bailey

Having travelled to the market recently and seen every type of produce that would normally be there on sale, Philomena Preddie, a rural farmer, is of the view that the Government might not be doing all it can to combat the drought.

"I understand that some crops might be small in quantity, causing the price to rise, but in some areas, the crops don't exist any at all. I am wondering now if some areas are able to withstand the drought due to the resources they have and if other areas could, perhaps, do the same or get the same help."

She continued: "I don't buy foreign produce and I wouldn't want to know that I'll have to, because I don't want it … . I want to know if the Government is thinking of all the options that could be available before they start fully importing produce."

Preddie, who used water from her tank to water her crops, said it has reached to the stage where she can no longer do so.

"I use to walk around and water my crops, and depend on the rain because every crop needs rainfall, but now I have to be conserving it for domestic use. There is no rain and it doesn't seem like it will be coming for some time … . If we don't get any rain between now and September, we won't survive because everything is already drying up," she said.

Preddie, who plants corn, red peas, pumpkin, sweet potato, cassava, yam, banana, plantain and peppermint, said she has been farming for more than 40 years and, for the first time, she feels as if she doesn't have a farm.

"I have lost so much. Between money for labour and material, I have lost thousands of dollars and it won't get any better; worse days are ahead."

Aware that the Government can do nothing about the rain, she is hoping all options will be exhausted to end the water woes and that importation of food may not be the final resort.