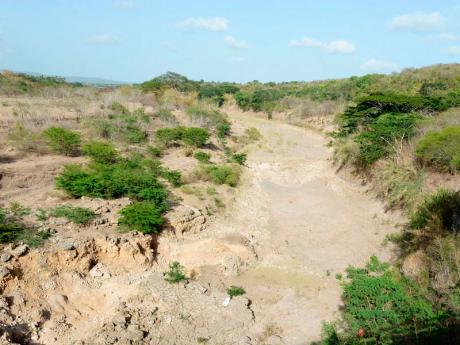 A section of the Rio Minho in May Pen, Clarendon, is now dry. - Ian Allen/Staff Photographer 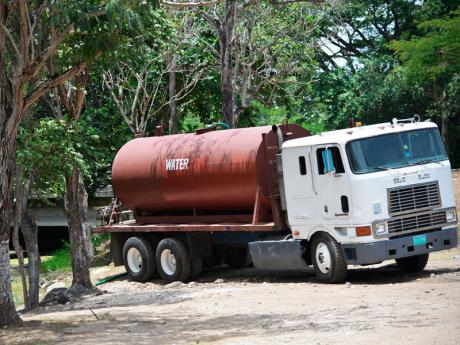 As the drought continues this water truck filling up from a river along the Mandela Highway in St Catherine recently will be a frequent sight in the Corporate Area and across the island. - Norman Grindley/Chief Photographer
1
2

Apart from those in the Corporate Area, the parishes expected to be severely affected by the current drought are Clarendon, Manchester and parts of Portland and St Thomas.

And those projections are proving correct. Owners of small hotels and guest houses in certain sections are reporting low flow or dry pipes.

Neason Brown, of Brown's Guest House in East Prospect, St Thomas, admitted they have been having "a little difficulty" recently.

"Occasionally, we've had the water pressure go really low, but it's not too bad," he said, noting he has had to truck water in about once a week.

"Over the past four weeks or so, it's been more regular."

However, he was not too concerned about being able to ride out the current situation.

Such optimism isn't shared by others.

Yvonne Campbell of Hotel Casanova in Portmore, along the popular Port Henderson Road stretch, said there have been periods when they have had no water for hours at a time. To alleviate the lock offs and not inconvenience customers, the establishment has had to truck water.

This water supplies the two large tanks used on the property. Campbell said the hotel doesn't offer services like washing customers' cars, which is prohibited at this time. But water just for regular activities like cooking is short at times. Campbell said at the current rate, the hotel could not keep trucking water for extended periods.

Other hotels across the Corporate Area, however, said while there were some disruptions, business was still running fairly smoothly. Others said what lock offs did occur, the negative effects were greatly reduced by their reliable storage tanks.

The barber shops and beauty salons share the same fate as the hotels. The drought conditions and subsequent water restrictions facing the island, especially the Corporate Area, have had mixed impact on business operators. While some salon operators we spoke to in the Washington Boulevard area and sections of downtown Kingston were not complaining, others are not so lucky.

Charmaine Shortridge, manager of The Barber Centre and Spa along Constant Spring Road, said they have had to supplement their water supply for the past few weeks.

"We have had to be bringing in water because we don't want any clients to be turned off or turned away," she said.

A 50-gallon drum usually suffices their needs when the regular water supply is restricted, but this can cost $2,500. Dependent on the customer flow, two drums may be needed. Shortridge noted this has put a strain on their budget.

"It has been tough because we still have to be paying the water bill as well," she said. "This (paying for extra water) is an added expense we didn't budget for."

She said the amount of water needed depends on what clients are coming in for, as those getting their hair relaxed and shampooed require more of the precious commodity.

At the current rate, Shortridge said other measures may have to be employed.

"I don't know how much longer we can continue at this rate," she said. "I might have to start carrying water from home so I don't have to pay for any extra."

"It's really been since last week we've been experiencing restrictions. In the evenings, we haven't been getting any water," she said.

While other establishments are winding down business as dusk approaches, this establishment is somewhat different. Reid explained that they get most of their customers in the evening, as persons stop by on their way home from work.

"It has really hampered us because sometimes we have to turn away customers," she said.