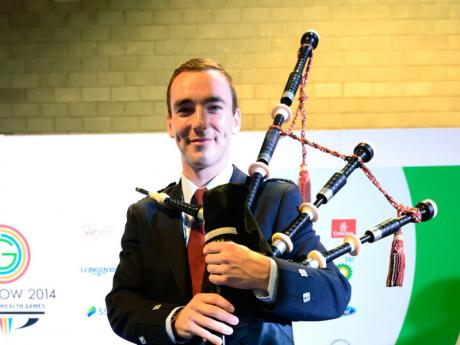 Jonathan Graham gives a cultural presentation with his bagpipe, while wearing a kilt at the main press centre for the Common-wealth Games in Glasgow, Scotland, yesterday. 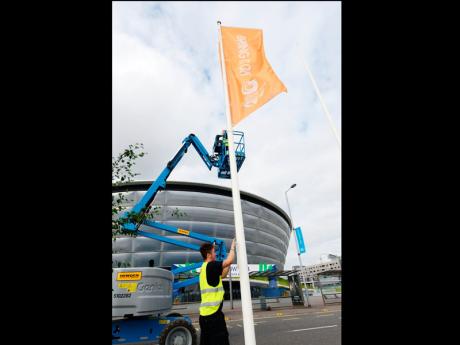 Workmen at the Scottish Exhibition and Conference Centre make adjustments to a flag yesterday at the venue that will host several sporting events at the Glasgow 2014 Commonwealth Games. - PHOTOS BY Ricardo Makyn/Staff photographer
1
2

However, according to well-placed sources, all but one of the athletes have been cleared to compete.

In another matter, Brown assured that the island's contingent were not affected by an outbreak of diarrhoea and vomiting that hit the Athletes' Village over the last few days, noting that the management team has informed the contingent of the necessary preventative measures to be taken for safety.

Glasgow 2014 organisers admitted that there was a 'small number' of cases among the workforce at the Dalmarnock-based residence site for all athletes and team officials competing at the July 23-August 3 multi-disciplinary event, sending fears of a repeat of health issues from the previous Games in Delhi, when several athletes were affected by stomach problems.

"There was an outbreak, but it was restricted to the areas where the security personnel were working and most of them were sent home and additional sanitation programmes were put in place," Brown told The Gleaner. "We have not had any issues and we believe that it has been contained.

"They (organisers) have also given instructions on how to deal with it if any further outbreak occurs," added Brown. "We had a management meeting and all the athletes have been briefed."

The 22 track and field athletes had been awaiting their documentation, having not been registered to compete here, after a mix-up in the process due to Jamaica's trial event for the sport - the National Senior Championships - being staged beyond the original dead-

Jamaica and several other countries were given extended deadlines to make their final registrations, but the submission process had not gone as smoothly as anticipated, prompting a meeting by the Organising Committee and the Jamaica Olympic Association board, which took place yesterday evening.

"Athletes are coming into the village as scheduled, but as you know, we had an issue with 22 athletes so those can't come in and we are waiting on the board. They have been in meetings so we are waiting to hear what is going to happen," Brown had earlier advised.

Usain Bolt is not one of the athletes affected by this issue.

The Gleaner, however, understands that 21 of the 22 athletes have been given the green light and will receive their accreditation documents, with one athlete standing by as an emergency replacement.

The athletes had their first training session yesterday afternoon.

Brown went on to laud the facilities, and noted that the mood in the camp remains a positive one, despite the registration issues.

"The facilities are very good. There was an issue with the number of beds, and they are sorting that out, but it's not different from any other village. The food is ok ... everyone is fine ... the mood is very good in the camp."

Jamaica will choose the flag-bearer for Wednesday's Opening Ceremony, while Shelly-Ann Fraser-Pryce has been selected to carry the flag representing the Caribbean region as part of a new programme, which sees all regions being represented in the ceremony.