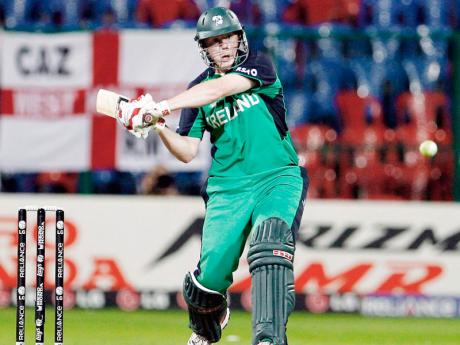 Kevin O'Brien narrowly missed out on a century as Red Steel sent Antigua Hawksbills crashing to their fourth straight loss of the Caribbean Premier League (CPL), with a nine-wicket defeat yesterday.

Opting to bowl first, the Red Steel restricted Hawksbills to 151 for eight off their 20 overs and then marched to their target with 17 balls remaining, thanks to O'Brien's stroke-filled, unbeaten 90 off a mere 49 balls.

New Zealander Ross Taylor weighed in with a patient, unbeaten 51, as Red Steel compensated for the heartbreak of their Super Over loss to Guyana Amazon Warriors in their last outing.

They lost Trinidadian Kennar Lewis for two with the score on seven in the second over, but O'Brien and Taylor hardly put a foot wrong as they posted 145 for the second wicket, to see Red Steel to their second victory in three games.

Hawksbills, who had a similar poor season last year, are still without a point with half of their complement of games already completed.

They got a run-a-ball 38 from wicketkeeper Devon Thomas, 30 off 28 balls from Australian David Hussey and 26 from opener Ben Dunk, also Australian, but they simply failed to find the firepower to post a competitive score.

Dunk and Danza Hyatt (eight) posted 30 off 22 balls for the first wicket before speedster Fidel Edwards struck, getting Hyatt to glove a pull at a short one through to wicketkeeper Nicholas Pooran.

Hawksbills then suffered two further blows, losing captain Marlon Samuels for 13 in the sixth over and Dunk, run out in the seventh over in a mix-up over a single with Thomas, at 48 for three.

Thomas and Hussey buckled down to stabilise the innings in a fourth wicket stand worth 66. The right-handed Thomas struck four fours and a six - a hefty blow over square leg off left-arm spinner Sulieman Benn - while Hussey counted a four and six.

Needing to push on, Hussey picked out O'Brien at long-off off Benn in the 17th over and Thomas followed in the next, edging a cut behind off medium pacer Kevon Cooper.

Cooper picked up three for 34, while captain Dwayne Bravo finished with two for 29.