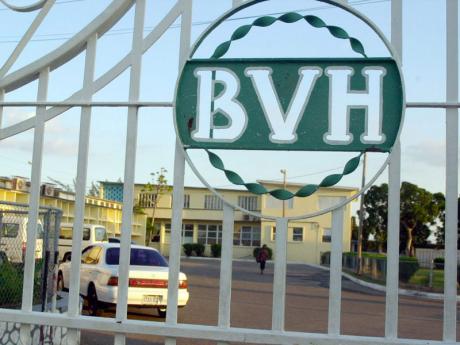 A Gleaner probe has revealed that the Bellevue Hospital in Kingston has become home to more than 500 long-term patients who do not require institutionalised psychiatric care, but remain at the government-run mental institution because they have no place else to go. 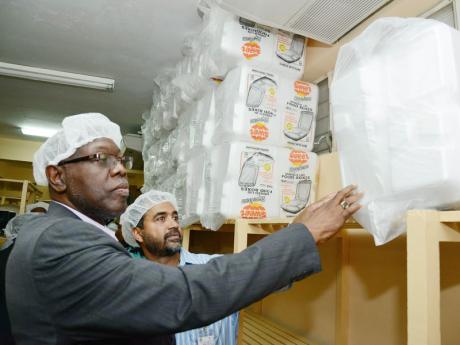 Minister of Health Dr Fenton Ferguson (left) and Dr Winston De la Haye, chairman of the board of the Bellevue Hospital, tour a section of the facility last Friday. - Rudolph Brown/Photographer
1
2

Established more than 150 years ago as the nation's main facility to treat persons with mental illnesses, the Bellevue Hospital in east Kingston seems to be morphing into a long-care facility for the homeless.

A Gleaner probe has confirmed that the facility, situated on 123 acres of land on Windward Road, is now home to 550 long-term patients without mental illnesses, while it sees only 900 mentally ill patients each year.

Most of these patients are capable of leaving the hospital and do not need institutionalised psychiatric care, yet they remain at the mental facility because they reportedly have nowhere else to go.

"Some of them are highly functional and mobile but are not accepted by their families or their communities, so with no options for housing, they stay here and fall into the category of 'hard to place'," confessed David Dobson, chief executive officer at the hospital.

Dobson noted that at least 40 of the 'hard-to-place' patients are senior citizens who suffer from mental retardation or have been living at the hospital for decades, developing other complications such as immobility, dementia and incontinence. He argued that in their present condition, finding alternative housing for them was very difficult.

"Unless there is a major injection of capital into the island's infirmaries and golden-age homes, the reality is that those forms of government housing suffer from a severe lack of capacity, ... the Bellevue Hospital is a government-run institution so maintaining them here is not an extra cost to the Government."

Health Minister Dr Fenton Ferguson last week announced that more than $118 million was set aside to improve various sections of the operations of the Bellevue Hospital since he toured the facility in early 2012.

"The demand for admission is about 15 persons per day, but the hospital's capacity is three per day. We started expansion and when completed we should be able to accommodate more patients," said Ferguson, following a tour of the facility in the wake of the latest media reports that conditions were horrible there.

Gleaner sources argue that more than 500 of 'hard-to-place' long-term patients could in fact be reintegrated to society. However many choose to stay at the institution, rather than go back to their communities. A psychiatric worker, who asked not to be named, told The Gleaner that in many instances long-term patients would feign psychosis in order to stay at the facility.

"There is a man there who has been there since the 1980s and functions well on medication, but as soon as you call him up for evaluation and say it's time for him to go, he gets sick, and they would say, 'OK, let him stay', and he goes back to being fine. Six months later when it's time for evaluation, he's sick again and then next day he's fine again," said the source.

In order to deal with these long-term patients, the administration at Bellevue is in the process of introducing a reclassification exercise whereby the acute mentally ill patients are separated from long-term patients who are to be placed in a home-care living arrangement.

In home care, patients, for the most part, will enjoy a group setting with staff levels at a minimum, as these patients can operate with minimal psychiatric or nursing care.

According to Dobson, these efforts are necessary as it is not feasible to have these patients removed from the hospital.

"If the resources, including knowledge, the accommodation and the team to support them and follow up with them were in place out in the communities, then mass movement would be possible along with some transitioning to prepare them for their new reality.

"If all this was available we would be open to mass removal, but sad to say, that is not the case, so it's really not feasible to remove them at this time," said Dobson.

However, Dr Geoffrey Walcott, consultant psychiatrist for community mental health services in Kingston and St Andrew, and president of the Jamaican Psychiatric Association; told The Gleaner that the difficulty in removing these patients from the hospital is that being at the institution for such a long time had made them 'pathologically dependent' on the functions of the hospital.

"What has been created (at Bellevue) is a level of dependency for the people who are being treated and now they cannot function outside of the institution," said Walcott.

"None of my patients can depend on my service, because I am providing treatment, but they still have to go about their daily lives, they have to function on their own, because life demands it," added Walcott.

He charged that the situation at Bellevue is a humanitarian crisis that can only be remedied with the reclassification of the facility from a hospital to a home-care facility, while simultaneously expanding community mental health care across the country.

Staff could be better utilised

Walcott argued that the 600 members of staff at Bellevue would be better utilised in the community clinics across the island rather than giving care to people who do not need it at the hospital.

"These 560 people are already living there for 20 years, so the space is already there for them, but here is the issue: because Bellevue is a hospital you have to maintain a certain level of staffing, so you are paying people to be there that don't need to be there," said Walcott.

"But if you reclassify the hospital, then you can shift your staff to more appropriate areas, either to the acute cases or to community health, which can absorb all the staff, because if we can do so much with the little staff that we have, imagine what we could do with 1/10 of the staff that is at the hospital caring for people who don't need care."

Walcott argued that the majority of new cases that are seen at the Bellevue are persons who don't know that care is accessible to them in their communities.

Statistics provided by the Ministry of Health show that between the Kingston Public Hospital's psychiatric ward (637) and the community mental services in Kingston (3,173), approximately 3,800 patients were treated in 2013. In comparison, the Bellevue hospital admitted 1,001 patients and released 942 of them in that year.

End in sight for hospital

According to Walcott, these figures make it clear that the end is in sight for the hospital which came into existence as a separate institution for the care and treatment of mental disease in 1861. Prior to this, it was connected to the Kingston Public Hospital and was known as the Jamaica Lunatic Asylum.

"Once there is no longer that long-term residential population at Bellevue, I don't think it's going to be feasible to operate a hospital which admits the same number of patients as a single service at the KPH, which consists of only two doctors."

But the CEO of the hospital is adamant that Bellevue still plays an essential role in the treatment of mental illness. Dobson was also defensive of the more than 500 hard-to-place patients who, he argued, still needed rehabilitative care.

"The fact is community health care is not ready to take over all the functions of the Bellevue Hospital. You need to ask the community health-care workers how many times we have had to come to their rescue," charged Dobson.

"There have been ridiculous suggestions about what to do with long-term patients, like putting them in foster homes, but with the stigma associated with mental illness, would you want to offer foster care in your home to somebody with a history of mental illness?"