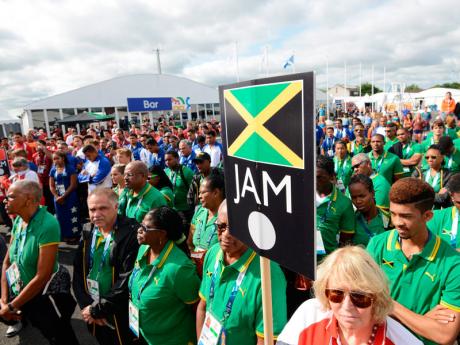 Members of the Jamaican delegation participate in the flag-raising ceremony at the International Zone of the 2014 Commonwealth Games Village yesterday in Glasgow, Scotland. - Ricardo Makyn/Staff Photographer

The Jamaica Olympic Association (JOA) is forking out just over $50 million dollars to fund Jamaica's participation in the 20th Commonwealth Games in Glasgow, Scotland.

One hundred and sixty-four athletes, coaches, managers, as well as medical and support personnel are currently in Glasgow as part of Jamaica's delegation for the multi-disciplinary event, which gets under way with an opening ceremony at Celtic Park tomorrow.

Former Commonwealth Games Federation president and current JOA boss Mike Fennell - who also confirmed that a registration issue that affected 22 Jamaican athletes has since been cleared up - noted the developments shown in both traditional and non-traditional sports, while underlining the importance of the Commonwealth Games.

"The total cost of coming here is over $50 million, of which we expect to get back between $20 and $25 million," Fennell told The Gleaner during yesterday's flag-raising ceremony at the Athletes' Village in the Dalmarnock district.

"It's a very costly undertaking and that's why in the four-year period between Olympics we are very careful to put aside reserves to handle that so that we can handle a team of over 150 persons without having to cry out too loudly. It's about prudent financial management," Fennell said.

"The organising committee helps you with airfares, but the airfares that they give you are based on bookings well in advance. We are not able to book our airfares until much closer to the Games because of our various national championships when the more expensive fares are available, so the travel subsidy only covers about 55 per cent of the cost," Fennell pointed out. "But we plan for this, and you have probably noticed that there has been no urgent cry because we have managed our business properly."

Twenty-two track and field athletes were at risk of not competing at the Games, having not been accredited due to issues with the registration process for their respective events.

All but one of the athletes were, however, cleared to compete late Sunday night after meeting with the organisers and the JOA executive.

"We had a hiccup with that because with the technology that's used, although you may have names, the technology does not accept the full entry until all the details are filled in. So some of those details are not available at the time, but that has been approved by the Commonwealth Games Federation," Fennell confirmed.

Jamaican athletes have won 112 medals at the Commonwealth Games - 42 gold, 34 silver and 36 bronze - making it the 12th most successful nation in the history of the Games.