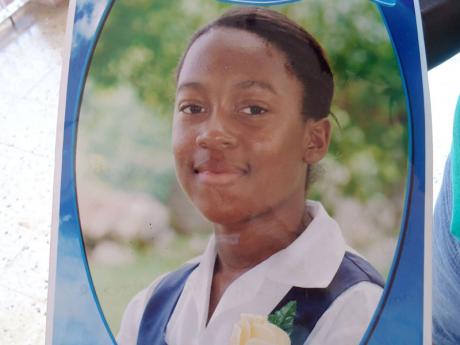 "I STILL sit here on the verandah just staring, looking to see Amoya come through that gate," a teary-eyed Cheryl Morgan said as she shared her recollection of what has been a dismal period following the disappearance of her daughter almost a year ago.

This has been Morgan's second interview with The Gleaner since Amoya Anderson's disappearance.

Amoya, who was 14 years old at the time of her disappearance, left a four-year-old child she was babysitting and a note on October 27, 2013.

Despite being a resident of St Thomas, where she lived with her mother, Amoya was staying with her stepsister in Portmore at the time.

"I was at church the Sunday night when I saw some missed calls and messages from Amoya's father on my phone. He asked if we heard from Amoya because she left a note saying she was tired of being a slave and would be going home. I called home immediately," Morgan said.

"Upon hearing she had not arrived home, I started to tremble immediately. I felt weak, nervous and started to cry," she continued.

Nine months later, the feeling of despair keeps getting worse as the days go by. There has been no breakthrough in the case. Amanda, Amoya's 13-year-old sister, continues to serve as Morgan's main source of strength.

"I would sometimes think, has this really happened to me - me?!" she exclaimed.

"I would see cases like this happening to other persons all the time and hear of instances where persons have to be identifying their children's bodies, but this is actually in my household, not even at my doorstep, but in my house. I feel really devastated," Morgan said.

"At times, I just do not know what to do. In January, I almost had a heart attack right here in this house due to how I was feeling," she continued.

Morgan also expressed concern about how the police are handling the matter.

"The police is another story. I think if I have to really come in contact with them about this, I don't know how tolerant I will be due to what I have gone through with them as they have been of no help," Morgan said.

"We have to be searching for Amoya ourselves. The police are not trying to find her. All they would say is that the children always come back and that they think she may be pregnant," she continued.

Morgan has not discounted the possibility of a pregnancy, noting that even if Amoya were pregnant it would not be a problem because her life is priceless.