Sunshine Girls determined to get over hump 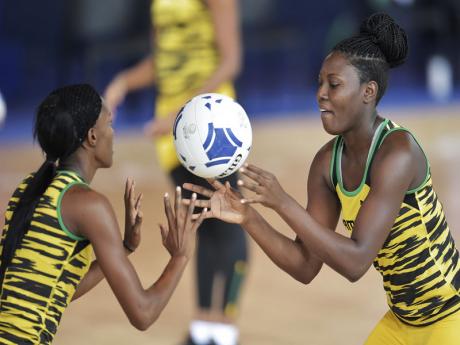 Twenty-three points separated Jamaica from a bronze medal in the netball competition at the last Commonwealth Games in Delhi four years ago; England's crushing 70-47 defeat sending the Jamaicans in a spiral they are desperate to end.

That past is now fuelling an even greater desire for the Jamaicans to shake the history of fourth-place finishes at the Commonwealth Games and shoot their way to a medal in Glasgow.

Only once has Jamaica claimed a medal in netball at these championships. That was back in 2002 in Manchester, England.

The team has finished fourth on the three other occasions netball was played at the Commonwealth Games.

Coach Minette Reynolds, who watched calmly from the sidelines as the team stretched their legs in a 71-41 win over Northern Ireland in a practice game at the Scottish Exhibition and Conference Centre yesterday, made it clear that the team is firmly over the disaster of 2010 and is hell-bent on getting on the podium this time around.

"We are over that experience (in 2010). We have done our work and looked back at where we have been falling short and really done a lot of work with our sports psychologist back home. We talk about issues, anything that affect them on court or off court. We encourage them to talk about everything because we don't want it to affect their play," Reynolds told The Gleaner.

"We are looking to return to the podium," Reynolds added. "The girls are ready to go. They have been talking a lot among themselves saying that they need to pull themselves out of this slump that they have found themselves in for the past few years and that they want to deliver a medal.

"They themselves are tired of the fourth-place finishes and this is an opportunity for them to go out there and get themselves among the medals," Reynolds added.

If that is to happen, they will need a full shift from veterans Kasey Evering, Paula Thompson, Nicole Aiken, Romelda Aiken and Sasher-Gaye Henry - all of whom were part of the 2007 World Netball Championships bronze medal-winning team. Evering and Henry actually played together on the 2000 World Youth Netball Championships team that won silver.

"Experience is going to be of critical importance to us and we will need that blended with the youth, especially when we are up against the stronger teams. The girls that are more experienced - those who have played in the ANZ and at this level before will need to work overtime in bringing the others along," said Reynolds.

Still, with an explosive cadre of young players such as Thristina Harwood, Shanice Beckford, Vangelee Williams, Khadijah Williams and Stacian Facey, Reynolds and technical director Jill McIntosh feel they have a team capable of getting the job done.

The last time they were in the United Kingdom, they made it to the podium. This time, the Sunshine Girls are hoping history repeats itself and gets them over the hump.