Blake undergoes hamstring surgery - Out for remainder of 2014 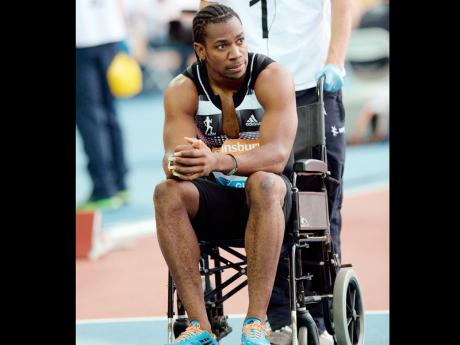 Yohan Blake leaves the track injured in a wheelchair after pulling up during the men's 100m on Day One of the Diamond League meeting at Hampden Park, Glasgow, on Friday, July 11. - AP

Yohan Blake will miss the remainder of the 2014 season after undergoing surgery in Germany to repair a damaged hamstring muscle.

Blake, the 2011 World 100-metre champion, damaged the muscle while competing at the Diamond League meet in Glasgow, Scotland, almost two weeks ago.

The athlete's coach, Glen Mills, confirmed that Blake underwent surgery, but said he didn't have much detail.

"I will know more when he comes back to Jamaica, I think, next week," Mills said in response to queries. "He is there with his agent."

The injury was considered to be more severe than was originally thought, after Blake fell early into his 100-metre race on July 11. Blake flew to Germany afterwards to have the injury evaluated and subsequently underwent an operation.

Earlier this season, Blake had opted out of competing at the Commonwealth Games, which begins today in Glasgow, Scotland, so that he could focus on preparing for the World Championships in Beijing next year and the Olympics in Rio in 2016. He missed most of the 2013 season after injuring his hamstring at the UTech Classic in April that year and was unable to defend the World title he won in Daegu in 2011.

The 24-year-old double Olympic silver medallist returned this season and helped Jamaica set a new world record in the 4x200-metre relay in The Bahamas in late May. However, since that time, his performances suggested he was struggling to recapture the form that saw him becoming the second fastest man in history in both the 100 and 200 metres, with times of 9.69 seconds and 19.26 seconds, respectively.

At the adidas Grand Prix in New York on June 14, Blake tripped at the start and finished second in the 100 metres in 10.21 seconds. He then finished sixth in the 200 metres in Lausanne on July 3 in a pedestrian 20.48 seconds.