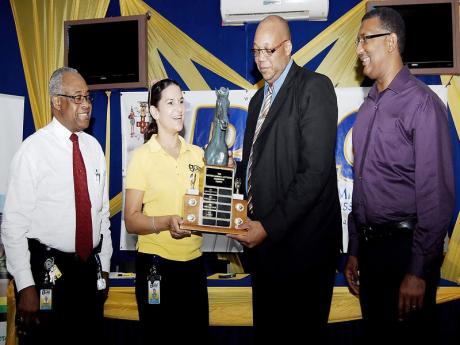 In recognition of the 10th anniversary of the Betting, Gaming and Lotteries Commission (BGLC) raceday on Friday, August 1 (Emancipation Day) at Caymanas Park, the regulatory body has increased its contribution to purses from $1.5 million to $2 million this year.

This was announced by Gary Peart, chairman of the BGLC, at yesterday's launch in the Trainers' Room at Caymanas Park.

He went on to explain that the $2 million contribution to purses will be distributed among the nine races, including six special trophy races, several named after BGLC colleagues who have passed.

In addition, provision has been made once again for a Gimmick Race, for racing personnel and others over 200 metres, with a purse of $70,000, this confined to the two-legged species - the jockey being a female attached to the male, representing the horse.

In closing, Peart said that the BGLC will be giving the first 1,250 punters who enter the park a special gift item, as well as 250 raceday T-Shirts for the hard working CTL grooms, starting gate attendants and other staffers on the day, while Power 106FM and CNS Television will provide live broadcasts.