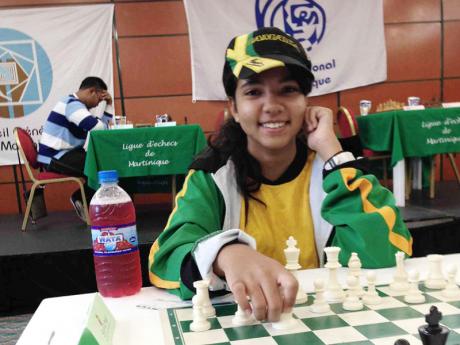 Fourteen-year-old Rachel Miller proved too advanced a player for her age group in May's Pan-American Scholastic Chess Championship in El Salvador, where she won sublimely.

That tactically brilliant win no doubt pushes her along the path to becoming Jamaica's first world champion of chess, as the diligent young player will represent the country in the World Chess Olympiad in Tromso, Norway from August 1-15.

Her Pan-Am title has now been ratified by FIDE - the sport's world governing body - which means this gifted teen is no longer an amateur. Rather elite, Woman FIDE Master (WFM) Rachel Miller.

Miller becomes the youngest Jamaican ever to win the Caribbean (WCM) and Fide titles.

"It is a great feeling being Jamaica's youngest champion. All those hours of hard work have really paid off," she outlined.

Another 26 noteworthy achievements in her short, but resplendent career so far, sets her apart from even seniors.

Coach Warren Elliott describes her as a future great.

"I believe she is at the level which she has won so far. I see her over the medium and long term as a potential Grand Master," he added.

Elliott also said it is challenging getting her match-ready.

"It takes a lot of academic and organised preparations," he noted.

"We meet four times per week and train consistently for three hours on theoretical and practical approaches."

The coach described getting corporate sponsorship as challenging.

"Having support will help her go to more tournaments and fund her career to the highest level."

He added that without the financial support, Miller's imminent arrival on the global stage would be stalled.

Talent, intellect and a perfect balance of faculties would best describe Miller nevertheless. But outside chess, she earned top academic honours in 2011, as she shone supremely with 'a near perfect' 99 per cent average in the Grade Six Achievement Test (GSAT).

While the player describes competing in chess as challenging and unpredictable, local experts contend she's set for greatness. This group includes technical director of the Magnificent Chess Foundation, Daren Wisdom.

"Rachel is a young chess prodigy," lauded Wisdom. "Very mature for her age, which is why she does so well."

He added: "In El Salvador she won with a round to spare."