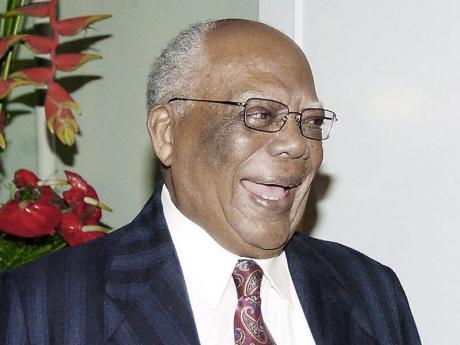 FOR LITTLE more than three hours, members of the Upper and Lower Houses of Parliament yesterday paid tribute to former Governor General Sir Howard Cooke during a joint sitting of both houses in Gordon House - the seat of the nation's Parliament. Members of the legislature observed a minute's silence in remembrance of the late Head of State. Sir Howard, who served as governor general from 1991 to 2006, died on July 11 at 98.

"Sir Howard was an outstanding Jamaican and he was a decent and honourable man ... . He gave selfless service to our country and he served us with distinction."

Speaker of the House of Representatives Michael Peart

"He is truly a man of the people and a man for the people. Sir Howard was the epitome of commitment, dedication and integrity."

"He was a humble man from humble beginnings, yet he would come to amass considerable acclaim and distinguish himself to eventually holding one of the highest offices in Jamaica."

"His innings at the crease of life was well played, solid and stylish. A genuine contributor to the nation; one of the architects of our democracy, he dedicated his life to serving his country and his people."

Leader of Opposition Business in the Senate Tom Tavares Finson

"Like all good masons, he played his part utilizing all the tools of his craft, laying his row of bricks true and straight, in the construction of this structure that we call our nation, this Jamaica, land we love, and for that we are eternally grateful."

"Sir Howard was a devout Christian, emboldened with an ecumenical spirit. His unrepentant and unapologetic stance in infusing Christian values and tenets in all aspects of his private and public life was exemplary, even though it may have jarred some people."