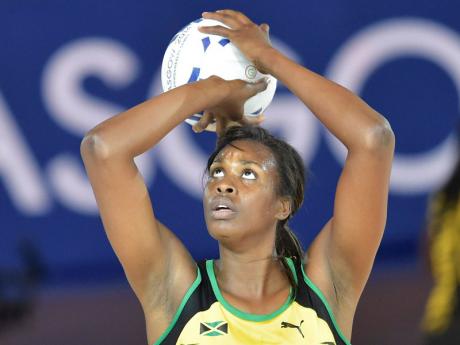 Sunshine Girls shooting ace, Romelda Aiken, reports that her team-mates can hardly wait to get their Commonwealth Games campaign under way today, as they look to signal their intentions against minnows St Lucia (18th ranked).

The 20th instalment of the multidisciplinary event gets under way with Aiken and the rest of the members of the number four-ranked Jamaica team commanding the spotlight, as they get their quest for a second podium finish at the Commonwealth Games on course at the Scottish Exhibition and Conference Centre (SECC) at 7 p.m. (1 p.m. Jamaica time).

Swimming star and a medal favourite, Alia Atkinson, along with several of her fellow swimming teammates, will get in on the early Games action as well, with Jamaica also being represented in badminton, cycling, triathlon and table tennis.

Aiken, who stars for ANZ heavyweights Queensland Fire-birds, said that the team is eager to get started and believes they are primed to make a statement.

"I think we are ready to go," Aiken told The Gleaner. "We had a few practice games and a camp and now we are just looking forward to it. The girls are looking good and we are excited that we are up to start our first game. We can't wait to get on court!

"We just want to go out there and represent Jamaica to the best of our ability. We won't, at any stage of any game, give up and allow anyone to walk over us. We will be playing our part and we look forward to playing St Lucia and, hopefully, we can send a message to the rest of the teams in the championship that we are here for something big," she declared.

Aiken, who noted her role as a leader on the squad, dismissed any thought of complacency and underlined that both young and experienced players will have a strong say in the campaign.

"We are very focused, our head space is in the right place and we just want to make sure that when we step out there on the court, we do so as a team.

"I think the girls look up to me as a senior player or a senior member of the team and not just myself, but others like Sasher-Gaye (Henry) and Nicole (Aiken). We have all been in the same position, so we will definitely be looking towards each other for strength and leadership, and also, we will be giving the youngsters as much as we can to ensure that they don't feel left out, ensure that everyone feels comfortable, because when the going gets tough, we have to let everyone know that we are all there for each other," she continued.

A lot of attention will also be focused on Atkinson today. However, UK-born Zara Bailey will be the first swimmer in the Tollcross International Swimming Centre pool for Jamaica, with her 400m Individual Medley heat set for 10:40 a.m. (4:40 a.m. Jamaica time. Bailey returns a few hours later for the 100m butterfly heats, with Trudiann Patrick lined up in the same heat at 12:07 p.m. (6:07 a.m. Jamaica time).

Atkinson, who won 10 races on the circuit last year and is heavily tipped for a medal in Glasgow, swims at 11:38 a.m. (5:38 a.m.) in the 50m breaststroke heat, with the semi-final to come at 8 p.m. (2 p.m.). Dominic Walter is set to contest the 400m freestyle, with Timothy Wynter scheduled to feature twice today - first in the

100m backstroke, and then in the 50m butterfly.

Garron Palmer and Geordine Henry will partner in mixed team group play action in badminton at the Emirates Arena, where they come up against a Singaporean pair at 1 p.m. (7 a.m.).

Dahlia Palmer is Jamaica's sole representative in the women's 500m time trial, to be held at the Sir Chris Hoy Velodrome; going up against India's Kezia Vargheese at 4:42 p.m. (10:42 a.m.).

France-born Elisabeth Mondon will test herself in the women's triathlon event, which starts at 11 a.m. (5 a.m.) at the Strathclyde Country Park, while Jamaica's women's table tennis team will play number six-ranked Canada and Papau New Guinea in team play group action in table tennis, also at Scotstoun. The men face world number two England and Barbados in their assignment.