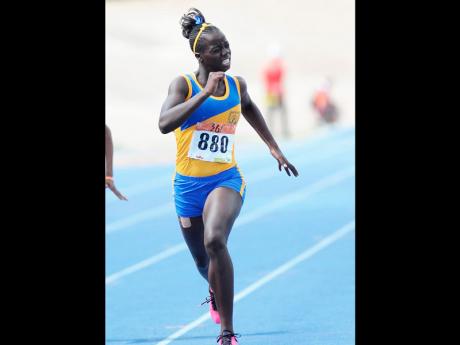 JAMAICA'S athletes battled cold and rainy conditions with success in the opening session on day two of the World Junior Championships at Hayward Field in Eugene, Oregon, as all four entrants advanced to the next round.

The United States' Kendall Baisdon, one of the favourites, won the heat in 53.28 seconds.

Yanique McNeil, running from lane eight, faded badly in the last 15 metres to finish sixth in 55.01 seconds. Luckily, however, several athletes were disqualified for lane violation - including Guyana's Kedeisha Beard, who had won her heat easily - and McNeil squeezed into the next round as one of the fastest losers.

"I am very unhappy with the outcome of the race as I did not execute well and I was looking forward to a faster time and a better position," McNeil said, as she vowed to do better in the semis.

In the boys' 400m hurdles, Okeem Williams weakened towards the latter stage in heat four, but held on for second in 52.88 seconds. Japan's Yusuke Sakonashi won in 52.46 seconds.

"I went out very fast because I was running out of lane eight and I wanted to ensure that I had a good lead on my rivals," said Williams.

Favourite Jaheel Hyde went out fast, secured a healthy lead and looked around on several occasions to see where his rivals were. He led up to the final hurdle before shuffling, which allowed Ali Khams Khamis of Bahrain to overhaul him and win in a new national Junior record of 51.10 seconds. Hyde clocked 51.60 seconds, the second fastest qualifying time overall.

"Normally, I would have gotten my left foot there first, but it was a surprise to me when the right leg came up first. But this is just the heat and I am not worried about that, as I came to qualify," he said.

"Despite the conditions, I am not complaining, because everyone is running in the same conditions and if you want to become a professional athlete, these are the things you have to endure," said Hyde, who warned to "expect something special".

Also today, Shanice Love and Shadae Lawrence will compete in separate groups of discus qualifying, which begins at noon, while Jevaughn Minzie and Michael O'Hara will compete for the third day in a row, when they take the track for the 200 metres at 12:45 p.m. (Jamaica time).