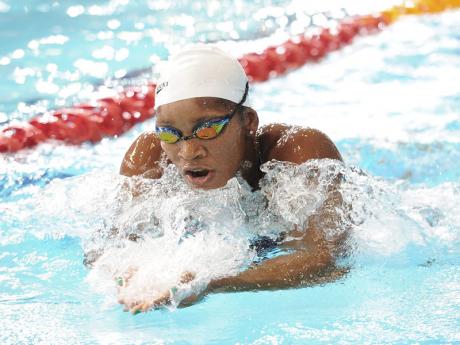 It's her third time competing at the Commonwealth Games, but Jamaican swimming star Alia Atkinson has never had higher ambitions - or, for that matter, expectations.

Twice on this stage before, twice was a place in the final her main target.

This time around, after a couple of years of really impressive performances and ever-increasing regard on the international swimming circuit, Jamaica's runner-up Sportswoman of the Year will only be satisfied with a podium finish at Glasgow 2014.

Atkinson is coming off what is probably her best year in the sport. She lowered two national records and won 10 races on the Grand Prix circuit. This success against the best that the world has to offer makes her a medal favourite here.

"I'm extremely proud, but at the same time I am amazed by myself, and as the years go by, I seem to be getting better and better," Atkinson told The Gleaner, shortly after a training session at the competition venue at the Tollcross International Swimming Centre in Glasgow.

"I have been to two Commonwealth Games and the best I got was about eighth place, so coming in here and to be in medal contention in multiple events, I'm extremely happy," she added.

Atkinson, who is tied with her namesake, Janelle Atkinson (no relation), as the best-placed Jamaican swimmers at the Olympic Games - following her fourth-placed finish in the 100m breaststroke in London - is clear about what she expects to accomplish.

"My objectives were completely different at the last two Commonwealth Games. Back then, it was just about getting to finals," she said.

"I think I had a mind switch after college that I would dedicate the rest of that time up to London 2012 - which was two years - just to swimming and with succeeding in 2012, my confidence and dedication grew and I started to believe in the fact that I could be where I wanted to be and I needed to take positive steps to get there," Atkinson explained.

"I wanted to go on the circuit in 2011, but I didn't have the finances. I went for the first time last year and it really worked pretty well, so I am going again this year," added Atkinson, who has benefited from special funding from the Government to assist in her training and competition expenses leading up to the Rio 2016 Olympic Games.

"I will go out there with the belief that I can do it if I do my best, relax and swim the race as I know I can swim. If I do that, then I think the results will go well," Atkinson said.