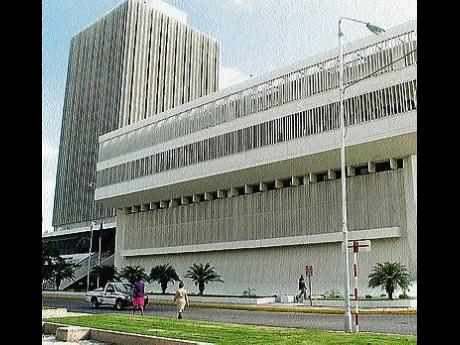 The Bank of Jamaica building at Nethersole Place, Kingston. - File

The Bank of Jamaica (BOJ) said it might penalise deposit-taking institutions which continue to clear cheques valued at more than J$2 million in the Automatic Clearing House (ACH) system instead of through the Real Time Gross Settlement System (RTGS).

The ACH is operated and owned by local commercial banks. The threshold for large payments was lowered from J$3 million to J$2 million in 2013. Transactions valued above the limit are mandated by the BOJ to be settled in its Real Time Gross Settlement System.

Noting that there are deposit-taking institutions which persist in trying to settle amounts over J$2 million through ACH, the BOJ said it was unable to say why, but added that they "are in breach of the threshold for the ACH and may be subject to a penalty charge by the BOJ at an annual review".

The central bank declaration was in response to a Financial Gleaner request for an update on the progress being made under its Real Time Gross Settlement System. JamClear-RTGS, as it is called, is part of the national payments architecture and was implemented by the Bank in February 2009, effectively replacing the Customer Inquiry and Funds Transfer System, the large-value transfer system.

The bank notes, in its latest edition of RTGS member rules, dated June 2014, that with the introduction of JamClear-RTGS commercial banks, primary dealers and other financial institutions are now able to transfer funds between themselves, for own account or on behalf of clients, in real time on a safe, secure basis. Its use is intended to reduce the systemic risks associated with delayed transactions under older arrangements.

Full members of RTGS have direct access and are permitted to undertake financial transactions with other members. They are also required to maintain a settlement account at the BOJ, and will be allowed access to credit services. The central bank said participants have access to intraday liquidity facilities and any other credit service that may be provided by the bank.

The BOJ said "the policy is that all deposit-taking institutions (DTIs) are eligible to be participants in the RTGS. For those DTIs that are currently not in the RTGS, they have either not applied or their applications are being processed. For those applications that are being processed, they will become direct participants once the process is complete".

There are 12 deposit-taking institutions supervised by the BOJ. The central bank did not indicate which ones are currently full members of RTGS and which are not.

The bank said, meanwhile, that there is no plan to close out the older ACH system, which offers retail facilities.

It its 2013 annual report, the central bank said transaction volumes passing through JamClear-RTGS for that year increased by 16.2 per cent to 256,148, while values grew by 6.6 per cent to J$14.2 trillion over the prior year. However, United States dollar values declined by 19.4 per cent to US$1,965 million relative to 2012.

Government of Jamaica payments amounted to 4,768 transactions valued at $479.4 billion during 2013, with the BOJ projecting that the level of payment from this source will continue to increase "with the intensification of the automation of these payments".

In June, the Jamaica National Building Society (JNBS) said it was about to join the RTGS as the BOJ recently approved building societies to become members.

"Becoming a member of RTGS will improve JNBS' operations as the member will no longer need FFC information and they would use their own JN account number instead of JNBS account number. In addition, JNBS members will also benefit from speedier processing of RTGS transactions as there is no third party involved," the society said.