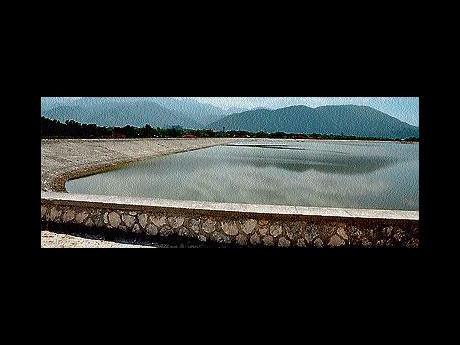 The water level in the Mona Reservoir, in St Andrew, is now down to less than a month's supply. - JIS Photo

The Jamaican hotel industry is being affected by the worsening dry spell with at least one resort in the eastern section of the island facing closure due to the water shortage.

According to Michael Gayle, chairman of the Port Antonio chapter of the Jamaica Hotel and Tourist Association (JHTA), the situation is dire as some properties are running out of options in sourcing water.

"As it relates to my property, we have been using two springs that are down to a trickle. We have started on a third spring that we have, and we are hoping that before this one is down we will be back to normal supply. If there is no ease, then we are forced to probably close," said Gayle, who is also the general manager of Bay View Eco Resort and Spa in the eastern parish of Portland.

Meanwhile, immediate past president of the JHTA, Evelyn Smith, says its members are bracing for an increase in operational expenses especially as it relates to the cost of agricultural produce.

"As the drought continues, there will undoubtedly be an impact on our farmers and the scarcity of crops will lead to higher prices. That will be a concern and will have consequences for our membership," Smith said.

Earlier this week, the Ministry of Agriculture said the protracted dry spell across the island has led to a shortage of several food items based on an assessment completed by the ministry.

Water Minister Robert Pickersgill has warned Jamaicans to brace for the worst as the dry spell continues, while the National Water Commission reported that levels at the two main catchment facilities in the Corporate Area have dwindled to about one month's supply, and the situation is deteriorating daily.