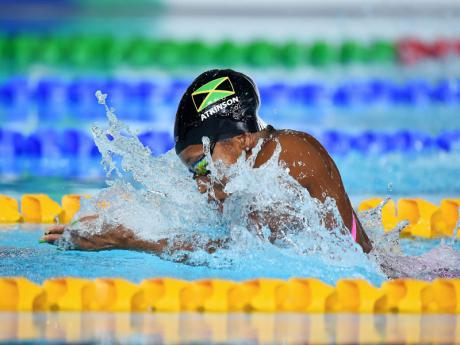 She wanted to make a statement, and that's exactly what she did.

Jamaican swimmer Alia Atkinson is on fire. The 25 year-old was in scorching form yesterday inside the Tollcross International Swimming Centre, twice breaking the Commonwealth Games record on her way to booking a lane in this evening's 50m breaststroke final.

Atkinson, who has been a force this year - her maiden season on the major swimming circuit, where she won 10 Grand Prix races, told The Gleaner that she wanted to show that she was the real deal and was determined to win her first Commonwealth Games medal here.

She will get her chance today, but if yesterday's preliminary round and semi-final strokes are anything to go by, then the Jamaican looks a safe bet for a podium finish, as Jamaica get set to celebrate its first medal here.

Jamaica has never medalled in this event at the Commonwealth Games and has only won three swimming medals in the history of the championships. The last two came in 2002 at the Manchester, England instalment with Janelle Atkinson's double bronze medal swoop.

Atkinson was pushed to the line in her mid-morning meet, stopping the clock in a games record 30.49 seconds, before returning in the evening to touch the wall in 30.17, lowering her own mark and setting the fastest time ever seen at the Commonwealth Games in the event.

But did she leave anything in the tank for tonight's podium race?

"I felt pretty good. Is it too fast, too early? To me this is where I should have been so going fast would be going out and hopefully ending up with a time in the 29 seconds (in the final). So I pretty much did what I wanted to do and I am where I wanted to be," she responded in confident style.

Atkinson said she has been champing at the bit to get in the pool here in Glasgow and is looking forward to delivering on the promises of a solid season and renewed optimism.

"It feels good to finally get out and compete. I work on telling myself that I have practised all I could, I have done all the work so I need to take it easy and go out there and do it. I will swim better if I take it easy so that's the plan, to swim relaxed and focus on the goals," Atkinson added.