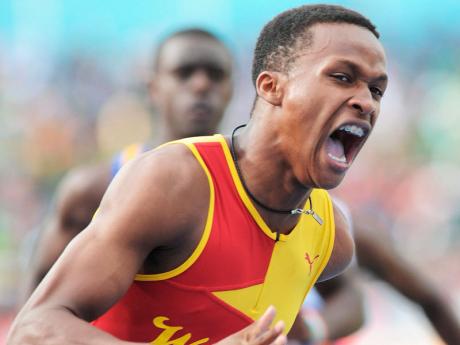 Last year's World Youth champion in the 110 metres hurdles, Jaheel Hyde, is poised to give Jamaica their first medal at the IAAF World Junior Championships in Eugene, Oregon.

Hyde, now competing in the 400m hurdles, had an effortless win in his semi-final.

With his parents, Angella Hussett and Lenworth Hyde cheering him on from the stands, Hyde looked very smooth and relaxed even easing up after the final barrier to win his heat in 50.77 seconds, ahead of Jose Luis Gaspar of Cuba, 51.37.

'saving all for tomorrow'

Hyde who will run out of lane five in today's final at 9:35 p.m Jamaica time is very confident of going all the way.

"This is only the semi-final, but I came out and did what I had to do. I didn't want to do a lot today as I am saving all for tomorrow," said Hyde.

In tonight's final, Hyde will not have things that easy. The fastest qualifier, Ali Khamis from Bahrain, defeated Hyde in the first round on Tuesday and he posted 49.93 while American Tim Holmes won his semi-final heat in 50.80. Jamaica's Okeem Williams trailed in eighth and last in his semi-final in 56.37.

Geneekee Leith, Jamaica's only entrant in the women's 400m hurdles, advanced to today's semi-final after finishing second in her heat in 59.59 seconds, behind Tia Adana Belle of Barbados who posted 59.05.

At press time, four Jamaicans were down to contest last night's 200m semi-finals. Both Michael O'Hara and Jevaughn Minzie, who both failed to reach the final of the 100m were first and second respectively in their 200m heats.

In women's discus Shanice Love had three no-throws while Shadae Lawrence, despite doing a personal best of 48.44m, failed to move forward. Triple jumper Tamara Moncrieffe is also out. She had a best of 12.92m.

On Wednesday night there was an American one-two in the men's 100 metres. Kendal Williams won in a personal best 10.21 ahead of teammate Trayvon Bromwel, 10.28 and Japan's Yashihide Kiryu, 10.34.

Great Britain Dina Asher Smith won in 11.23 ahead of Angela Tenorio of Ecuador, 11.39 and Kaylin Whitney of the United States, 11.45 seconds.