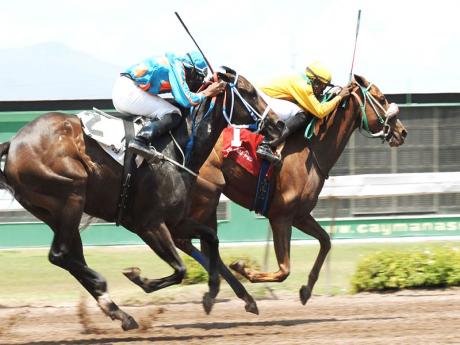 Despite two notable upsets in MIRACLE RECOVERY at 40-1 in the closing race over the straight and SPEEDY PROCESS at 14-1 in the ninth, the late Super-6 was caught by one lucky punter, who walked away with a cool $1.4 million.

We look at the first Super-6 which commences with a restricted allowance race for four-year-olds and up over 1600 metres, to be contested by eight starters.

The most consistent of the lot is of course ELUSIVE DREAM, who has finished second in her last four races. With title-chasing jockey Dick Cardenas sticking with the ride aboard the Winchester McIntosh-trained ELUSIVE DREAM, she is expected to start a firm favourite once again and should stave off RAJ KAPOOR under champion jockey Dane Nelson and PAID OUR DUES, who is regaining form.

Next on the programme is a restricted stakes for native and imported three-year-olds over 1400 metres in which nine starters have been declared.

Based on his fast-finishing second to STREET DANCER over 1100 metres on July 9, BARS OF GOLD from the stables of 14-time champion trainer Philip Feanny gets a glorious opportunity to make up or his disappointing classic campaign.

The three-year-old colt by He'sthgerealthing out of Gem Lea will love the additional 300 metres of this race and despite the presence of the somewhat disappointing Canadian horse RAGAMUFFIN, back to form EXCLUSIVE PRINCE and the three-year-old colt FRANFIELD, BARS OF GOLD looks the right choice.

ROYAL LINE, who was an easy winner over the circular nine course on a $180,000 claiming tag on June 18, is back to his happy hunting ground after two failed efforts in the higher grade and is tipped to resume winning ways over the same distance with in-form claiming apprentice Davidan Robinson taking the ride.

The five-year-old gelding from the stables of Dale Murphy beat NATURALFANTASY into second over this trip on July 9 and both could form the quinella once again, while COBRA (an upset winner over the distance on February 26) and the recently disqualified winner JAGSOVER should ensure worthwhile competition for my selection.

THE REAL DRAFT, who just failed to catch SISTER YVONNE over 1100 metres recently, will again have the services of jockey Shane Ellis and should now provide the key to race four for maiden four-year-olds and up, again over 1100 metres. The bay colt from the stables of Anthony'Baba' Nunes will report even better for this race and should catch the speedsters CLASSIC VOGUE and PROVIDER.

The last two races in the first Super-6 should be won by BATIDOR DE MUNDO (Robinson up) now back over the distance of his last win (1820 metres) and RESOLUTE in the sixth for maiden three-year-olds over the straight. Their respective dangers are FLYING MIRACLE and CLASSICAL TRAIN.