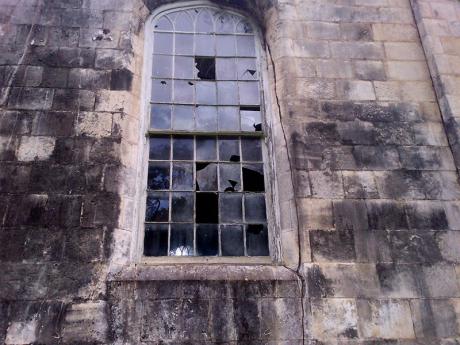 The windows of St Thomas Anglican Church in Stewart Town, Trelawny, are said to be targets for stone hurlers. 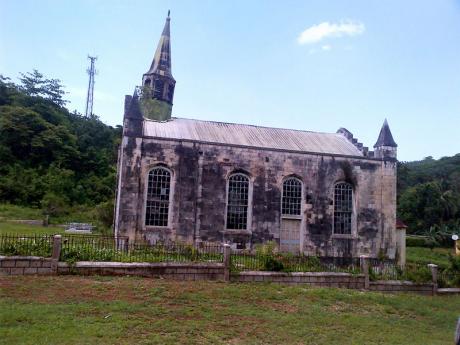 Two towers, one modern and erect, the other old and lean, sending messages of yesterday and today. -Photo by Paul Williams
1
2

STEWART TOWN, Trelawny:ST THOMAS Anglican Church in Stewart Town, Trelawny, was established in 1840, two years after Emancipation, and at a time when Stewart Town, which was founded 1812 and established 1815, was a busy market town where ex-slaves meet to sell their produce and acquire personal and domestic effects. The gothic-looking stone structure with a belfry is situated in basin, surrounded by limestone hills. The area is known as Bottom.

Local history said the church became a place of worship not so much for the newly emancipated people, but for those of wealth and influence, and the situation seems to be the case throughout its history. At the front, there are family pews that used to be separated by fly doors from one another. John Stockhausen, one of the most influential citizens, and his family worshipped there. His wife was an active member of the church. Their remains lie in the church cemetery.

Over the years, Stewart Town has declined significantly in prominence and infrastructure and is now regarded by some citizens as a "ghost town". And it was by a ghost of a chance Rural Xpress stumbled upon St Thomas Anglican. A news team was en route to Alps, one of the first free villages in Trelawny, when it spotted the structure looking very much like something out of a gothic movie.

Upon arriving at the spot, the team realised the church was derelict. There were holes in the glass windows, doors were barred, and the cemetery was overgrown. Passers-by confirmed that it has been abandoned for quite a while. And though the belfry was leaning backward, there was nothing else to say that the building was not safe. The thick walls were still sturdy and every stone was in place.

With the assistance of some residents, the team got to see inside, and was shocked at how the church was literally left to rot. Parts of it had collapsed. There was enough dust to choke a cherub. And there were sections that you dare not go, lest you fall from grace.

No longer playing those religious tunes was an organ, looking quite flaccid, de-composing in a corner. Water and termites have long turned its music off, for the prominent families have deserted their pews. Some still have their fly doors, only the hinges can be seen on others. A section near the pulpit was covered with guano (bat droppings). A resident helped himself with bags full of the blessing from above.

For whatever reasons, when worship stopped at St Thomas, it seems like no effort was made to secure what was left inside. Decomposing offering bags collects only dirt. Water-stained church and Sunday schools records and other documents, and hymnals are strewn all over. Fading pictures of some of the people associated with the church are still on the walls.

Of note, are two mounted marble plaques, one "in loving memory of Ivan L. Stockhausen, Lieut, British West Indian Regiment, attached R. F. C, who was killed in aerial combat, 3rd October 1917 in the Struma Valley, Greece, Aged 27". He seems to be a descendant of John Stockhausen.

The most interesting thing in the church though is a trap door. A man, who said, as a youngster, he used to go through it down into a cellar, pointed it out to the team. The cover of the door forms part of the floor of the platform at the front of the church, not far from the pulpit. A table is placed over it.

The man said he and his friends would go down into the cellar to search for swords which they heard were there. What they saw though was a pile of rusting handcuffs and foot shackles. But they were not interested in those. A subsequent search of the cellar revealed nothing.

So, what caused the abandonment of St Thomas Anglican? Why was it left to rot. The story from citizens is that the congregation got smaller and smaller over the years as it was a 'top-a-top' church. A call to Anglican House in St Andrew revealed that St Thomas Anglican is a part of the Brown's Town cure, and the bishop who could shed some light on the matter was off the island.