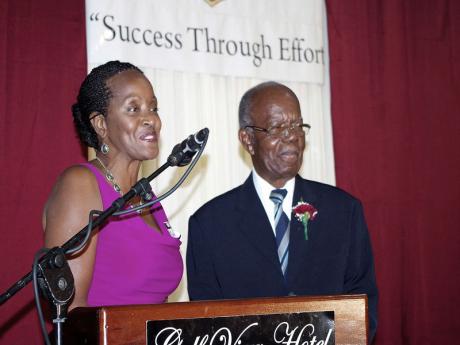 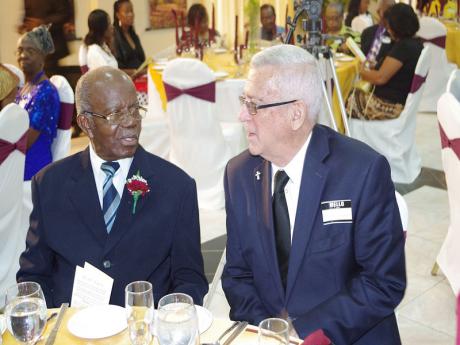 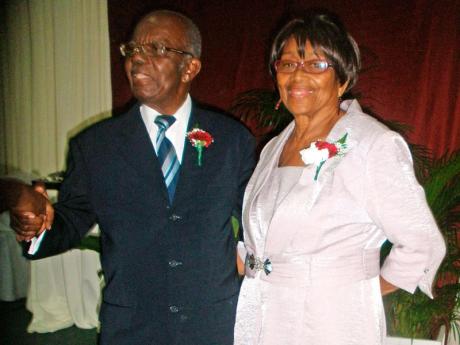 They say behind every successful man is a great woman. Burton holds close to the side his wife, Mrs Burton.
1
2
3

Mandeville, Manchester:When one speaks of qualities of an outstanding educator, the cultivation of minds through purposely playing classical music during the lunch hour might just be mentioned, but only if aligned to the stalwart tutor/principal, the Reverend Caswell Burton.

Burton, who was honoured recently by the Bellefield High School Past Students' Association at the Golf View Hotel in Mandeville, started his career in education when he worked for two years as a pre-trained teacher at the Mount Osbourne Elementary School in St Elizabeth. He had planned to gain employment in either the sugar or bauxite industry, which was a thriving one at the time, but was unsuccessful.

He later attended the Mico Teachers' College, where he completed a general education course, specialising in economics, geography, and history. It was during those years that he sat the General Certificate Examination (GCE) at the Advanced Level.

After leaving Mico Teachers' College and teaching at several schools, Burton enrolled at the University of the West Indies, where he completed a Bachelor of Arts degree in education and later became principal for the Bellefield Junior Secondary school now Bellefield High.

When Burton took the reins of the school, in the very first year of his tenure at Bellefield, the school produced the Spelling Bee champion for Manchester and later the All-Island Male Spelling Bee champion. Several students in that year were successful in passing the Grade Nine Achievement Examination, and progressed to traditional high and technical schools. It was here that he rang out for all to hear Denson and Bach classical music during the lunch break.

"Even in the bathroom the sounds could be heard loud and clear, it was as a means of cultivating and culturing minds for the greater good," said Burton.

Having seen the superb stewardship at Bellefield, the Ministry of Education was impressed and Burton was seconded to Spalding Junior Secondary and Rusea's High School during periods of crises at those institutions for nine months, each, while still maintaining his post at Bellefield. It was as a result of the work put in why the school also became model school and was rated as one of the top-three junior secondary schools in Jamaica and Burton receiving a scholarship to study in Scotland. Upon his return, he went to Manchester High for his remaining time in the field.

"You understood that education was more than just reading, writing and arithmetic and you worked hard to ensure we were cultured and well-rounded citizens," said a representative of the past students' association, Clinton O'Connor

He continued, "We salute you as a great communicator, educator and community and religious leader who has created pathways for us to succeed. Through your efforts you paved the way to learning, achievement and success for thousands of young Jamaicans who attended Bellefield during your tenure. Your contribution to our lives, our communities and our country is immeasurable and invaluable."

Guest speaker for the event, Dr Herbert Thompson, in his address said that the success of teachers is determined by having your 'trophies', who are your past students, talk back to you.

"From that light-bulb moment in class to the end of their tenure - trophies talk back ... with students willing to learn and teachers willing to teach there is no end to that."

Burton, who received a citation and several awards, was at a loss for words as the function kept in his honour was for him a dream come true.

"I have had many milestones, many have left me (at a) loss for words and this is one of them. I'm swept completely off my legs, I really hope this is reality and not a dream."

Though Burton has been retired over 30-odd years, he still chairs school boards and plays a crucial role in educational initiatives. One such initiative is the newly launched Bellefield Past Students' Association Scholarship Fund geared towards assisting students who have done well in GSAT and cannot afford to go to a high school. The first scholarship is expected to be awarded this August.