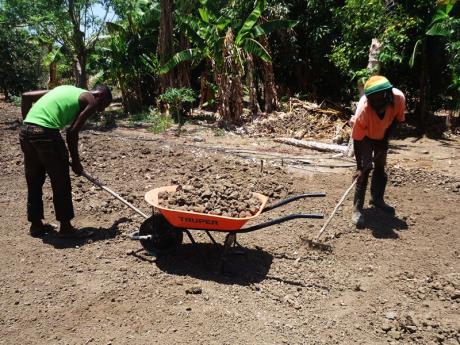 Gary McLean (right) and another farmer conduct an experiment, planting onions in June to test their viability in hot temperatures. 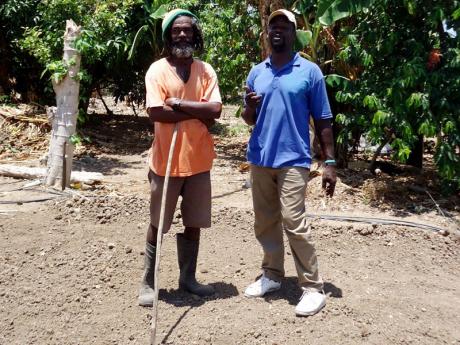 JAS St Thomas farmer Gary McLean (left) and president of the St Thomas chapter of the JAS, Horace O'Gilvie, on lands adjacent to the Yallahs Agro-Park. -photo by Jolyn Bryan
1
2

The St Thomas Associated Branch Societies of the Jamaica Agricultural Society (JAS) has had to postpone recently outlined plans for an agro-park due to the continued drought being experienced throughout the island. President of the JAS St Thomas Chapter, Horace O'Gilvie, told Rural Xpress that, initially, four acres of land, located alongside the Yallahs Agro-Park, were to be set aside for use exclusively by JAS members. The JAS was instrumental in the development of the Yallahs Agro-Park, donating 12 acres of land for the establishment of the project.

JAS farmers in Zone 1; from Yallahs, Heartease, Easington, Llandewey, Ramble, River Head, and Sommerset, would have been given a suitable plot of ground to plant gungo peas, sweet potato, onion, and pineapple. With funding from the St Thomas Co-operative Credit Union and marketing through the Agro-Investment Corporation (AIC), the park was expected to eventually become a cooperative, and would grow to include all JAS groups in the parish.

"We are more concerned now with the drought. We have to be finding ways to keep the farms alive. We will start the agro-park as soon as we are able to do so," O'Gilvie said.

He pointed out that access to sufficient water has always been an issue for St Thomas farmers.

"Ever since the removal of water from St Thomas to supply Kingston and St Andrew in 1984, we have had severe water problems for farmers. There needs to be a system in place to replace domestic water and irrigation," he said, referring to the construction of the Yallahs Pipeline, which brings water from the Yallahs Rivers in St Thomas to the Mona Reservoir. The construction of the pipeline left many farmers with little access to fresh water for irrigation.

The housing development around the agro-park has also raised issues, since some of the land zoned for farming has been sold to developers. The JAS president considers this especially since green areas are essential to providing food for developing communities.

Despite the challenges, and concerns that agro-parks are not commercially viable, O'Gilvie insisted that the collective farming and marketing inherent in agro-parks are essential to boosting agriculture in Jamaica. He has pledged to see the plan through, and is also encouraging independent farmers to become a part of the JAS.

"It only takes 16 people to start a group, or someone can sign up as an individual member. The more we come together, the more we can advance agriculture in St Thomas," he said.