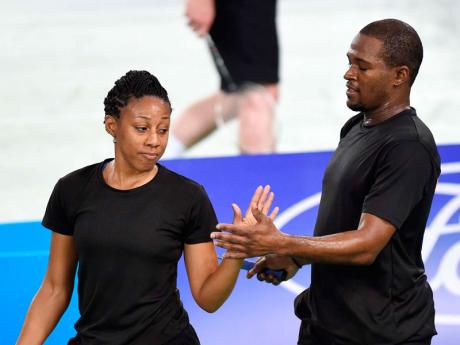 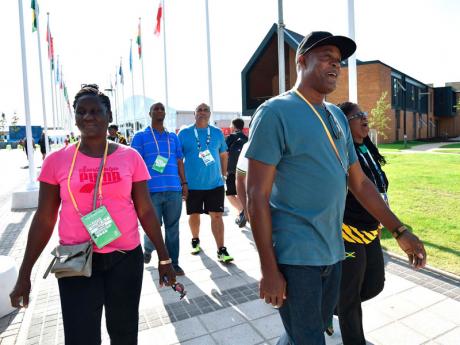 Usain's Bolt's parents, Jennifer (left) and Wellesley at the Games Village in Glasgow yesterday. Usain Bolt is expected to be in action in track and field at the games next week.
1
2

GLASGOW, Scotland:Swimmer Alia Atkinson will return to the pool this morning after winning Jamaica's first medal at the 2014 Commonwealth Games and the island's fourth in the pool, with silver in the women's 50m breaststroke at the Tollcross International Swimming Centre last night.

Atkinson, who twice broke the Games record en route to the final with 30.49 and 30.17 efforts in the preliminary round and semi-finals, was clocked at 30.67 behind defending champion Leiston Pickett from Australia (30.59) with Scotland's Corrie Scott taking the bronze in 30.75.

She will turn her attention to the 200m breaststroke, more confident than ever after winning her first Commonwealth Games medal and eager to add to her bounty here.

"This loss has awakened a lion inside me so I'm looking forward to the other events," said Atkinson after last night's swim.

The Sunshine Girls had to do without Khadijah Williams for three quarters after the young midcourt player hurt her back in a collision with another player, but managed to keep their nerve and rack up another comfortable win, beating Northern Ireland 65-35 at the Scottish Exhibition and Conference Centre.

The girls, who will spend today resting and preparing for tomorrow's clash against hosts Scotland, were concerned when the centre fell to the ground, causing a 20-minute delay as officials moved stretchers in place.

Coach Minneth Reynolds, however, believes that the youngster will be back in no time.

"She (Williams) fell badly, had a sore back. It's nothing to worry about and she will be fine after a little rest. Tomorrow (today), we don't have a match so we can give her some rest and I'm sure she will be good to go," said Reynolds. It's still, however, not clear if Williams will be available for the Scotland match.

Jhaniele Fowler-Reid sank 49 of her 55 attempts with Shanice Beckford chipping in with 12 from 16. Thristina Harwood scored four from seven attempts as the team struggled with 25 turnovers despite a solid enough 83 per cent shooting accuracy.

Nineteen years old welterweight Kestna Davis got the better of Bangladesh's Mohammad Hossein by way of a unanimous decision and will next fight India's Mandeep Jangra - the 2013 Asian Championships silver medallist on July 28.

In mixed team badminton play at the Emirates Arena, Jamaica were too good for Norfolk Island, sweeping the contest 5-0 and bouncing back from their expected loss to Singapore on Thursday.

Bianca Hernould was 19th in the women's 3000m individual pursuit cycling event at the Sir Chris Hoy Velodrome, while Dominic Walter was seventh in the 400m individual medley at the Tollcross International Swimming Centre in 4:43.86.

Jamaica's men lost 3-0 to Trinidad and Tobago in team-play table tennis action also at Scotstoun, while the women went down 3-0 to Malaysia.

Jamaica will today be represented in badminton, table tennis, swimming, cycling and boxing.