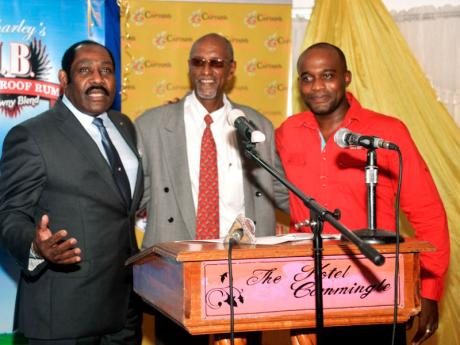 The announcement was made at the Confederation's Awards Gala, at the Hotel Commingle in Savanna-la-Mar, Westmoreland, on Thursday night.

"The Captain's Bakery took a decision years ago to invest in an area of national development and we chose the area of football to do so. We choose to support football," said Captain Horace Burrell, CEO, Captain's Bakery and Grill.

Burrell, fresh off his unopposed re-election for another term as head of the country's football on Sunday, said he was relieved to pass on sponsorship responsibilities to JB Rum, which he praised for coming on board when it mattered.

"Some people questioned why Captain's Bakery was sponsoring the parish leagues and they have a right to. [However], I made it quite clear that we would continue to assist the parish associations until they are able to find a sponsor; and by God am I happy tonight," said Burrell.

The Captain's Bakery spent over $16 million in its 10 years as the sole sponsor of the Western Confederation and in its last season as joint sponsors bumped their individual contribution up from $1.2 million up to $1.6 million, with Charley's JB Rum matching that figure for a combined $3.2 million.

It is expected that the new sponsors will increase the overall sponsorship package in a deal that could see the confederation raking in over $4 million per year, according to a source of The Gleaner.

Kevon Spence, Charley's JB Rum's brand manager, told The Gleaner that the sponsorship would be increased, but declined to say by how much.

Instead, he told journalists that his company plans on "owning the league".

"What we have found since we partnered with Captain's in the last season was that the clubs lack some amount of support. So, we have programmes in place to improve things from their level which means added support for the clubs. [As a result, they] can now offset some of the costs they have," Spence said.