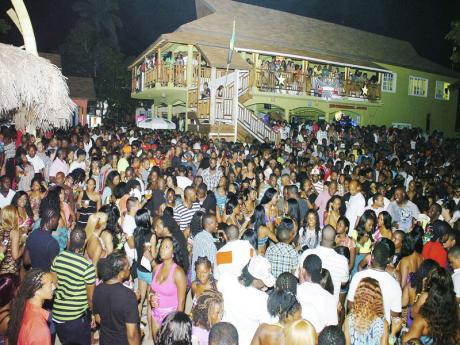 Patrons enjoying the musical vibe at a party.-FILE

WESTERN BUREAU:Stakeholders in western Jamaica's party central, Negril, say the resort town is all set to host another staging of Smirnoff Dream Week festival, set for August 1 to 6.

According to District Officer Delroy Anderson of the Negril Fire Station, firefighters are on target to handle fires and other hazards, except for emergency medical services, as the station is still without an ambulance.

"We are prepared for any eventualities that may occur, including fires and other emergencies, but right now we don't have an ambulance so we cannot offer an emergency medical technician service; but as far as fires are concerned we are prepared, our unit is up and running and our manpower is up to scratch," he said.

Speaking on the readiness of the Jamaica Constabulary Force, Inspector Clevert Foster of the Negril Police Station, said the police are prepared and ready, however, one primary concern for the police is the emigration of criminals into Negril for the period of Dream Week.

"My concern is migration of criminals," Foster said. "Right now we are maintaining a constant patrol on the (Norman Manley) boulevard and we are on the lookout for people who plan to come from Kingston, Clarendon, and all over Jamaica to really capitalise on the event."

OUT IN FULL FORCE

He warns potential wrongdoers that the police will be out in full force, much like previous years to thwart any planned criminal activities, in order to ensure the safety of persons in Negril during the period.

"Our planning started from as far back as a month ago. We are prepared, and it is not only Negril police who will be policing the event. We will have police from the entire divisions of Westmoreland and Hanover; we will be out in full numbers and we will aim to protect everyone from criminality," he said.

Local environmental and community development specialist, Lambert Williams, expressed satisfaction at Negril's environmental readiness and that of the police and other vital sectors to host the 2014 leg of the festival.

"I know the police are on high alert and the Tourism Enhancement Fund has ensured that the verges are kept clean. I notice the garbage trucks have been mobilised and the people are in a state of readiness, though the ordinary people have always been marginalised," Williams said.

"I know overtime the traffic has been an issue, but the police have been meeting to see how best they can simulate it to ensure they don't go through the same issues faced in previous years.

"Likewise, I know the police are geared up to tackle imported petty crimes, because it's not the typical wrongdoers in Negril that do this. You have people who come in with their armbands under the guise of partygoers; they are wolves in sheep clothing," he added.