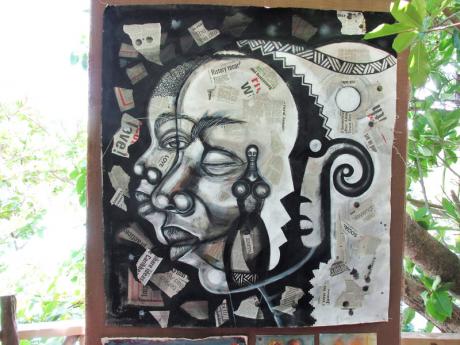 This mixed media in black and white tells the story and history of black people, according to its creator Larry Poncho Brown. 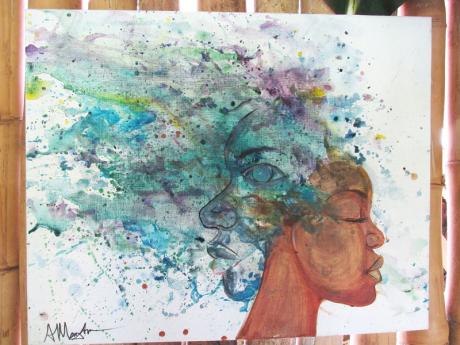 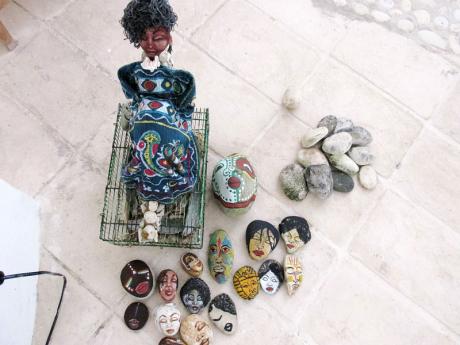 The 'Untold Truth' by Yvonne Onque of Baltimore, Maryland, is surrounded by stone faces. 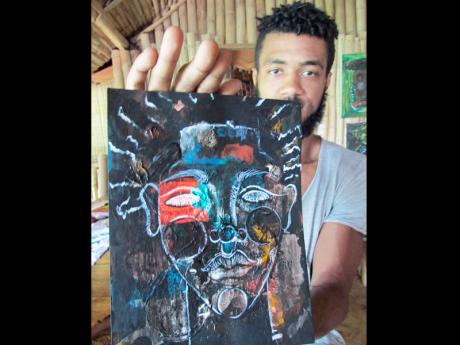 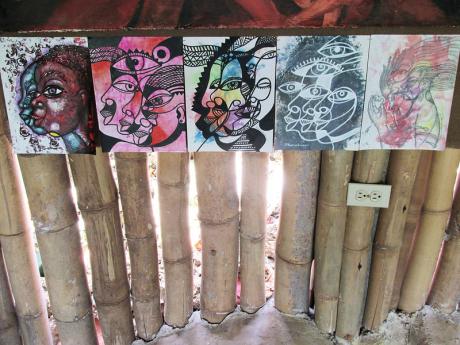 The week-long series of activities started with a guided tour of the National Gallery of Jamaica, followed by a discussion on 'Art as Biography' at Grosvenor Gallery. A tour of the homes and studios of some Jamaican artists completed the evening of the 29th. For the next six days, the artists were incubated, working side by side in limited space.

By the end of the week, the artists, including six from the United States, produced more than 60 pieces, most of which were displayed on Sunday, July 6, when Arts & Education took the opportunity to speak with four of the overseas participants about the programme and their works of art, in which the human face, telling a wide range of stories, was mostly depicted.

The youngest face among the participants was that of the self-taught Supreme, a 23-year-old longshore man/artist. He specialises in acrylic on canvas, but he has been doing artwork on clothes for three years now, mostly acrylic on cotton. During the incubation period, Supreme did seven pieces, including a self-portrait of sorts on a T-shirt, showing his two sides, perhaps.

"This week has been truly amazing. It feels so good to be so free, away from everything that is going on at home. I have time and space to live creatively," he said of his experience at Great Huts, from which he has learned that it is okay not to be so controlling with the art, "just let it flow".

"It's amazing because I am able to learn from others who have done it for so long and not many people have the opportunity to hear other artists, especially the elders."

He said his favourite piece, which he calls 'Flow', was developed from a technique he had learnt from fellow participant, Larry Poncho Brown.

And it wasn't just any face that was at the centre of the artists' concepts. The black face in all its diversity and shades narrates the stories and sensibilities of black people. Larry Poncho Brown himself created about 17 pieces, including a series of five. The faces on them, distinctly African, seem as if they are moving or shadowed, one upon the other, reflecting each other.

The well-known African-American-trained graphic artist-cum-fine artist does mainly two- and three-dimensional pieces, acrylic and mixed media. Using art to tell the story of black people was the most amazing part of the odyssey, he said. The rustic environment in which he worked also helped.

OUT OF COMFORT ZONE

The piece that stands out for Brown is a black-and-white mixed media with two merged women's heads that speak to the history and heritage of black people. Executing that huge piece, he said, took him out of his comfort zone. The "commonality" between the participants, Brown said, is the one word he would use to describe the experience at Great Huts.

Commonality is indeed the word, as the faces again were all over the smooth stones found in the area and on the property. Among her output, Yvonne Onque - originally from Newark, New Jersey, and now living in Baltimore, Maryland - had about 10 faces painted on small stones, natural 'canvases' strewn all over the place.

Painter, sketch artist, illustrator, photographer, film-maker Aaron Maybin has always be an artist starting out with sculpting. He majored in integrated art at Penn State University, and lives in Baltimore, Maryland. For him, the week was "awesome". He entered it with an open mind, and felt that there was a strong connection between many of the artists. "It's been great. It's a great experience," Maybin said.

Among his eight pieces, the black face stands out again. But the one that strikes him more than any other is the one that was created on a palette.

"The texture of the piece kinda led me to really wanna turn that depth into a face."

From the dried paint on the palette, he saw a face structure, a kind of mask.

"I think when you look at something like that, the texture of the piece is the first thing that grabs you," he said. "It was out of my comfort zone, but I believe it came out pretty good." A self-portrait, which he called 'True Self', it turned out to be.

Maybin, too, was inspired by the location in which they were incubated.

"When you come to a place that forces you to be alone with nature, you listen a bit more deeply, you get deeper into yourself, and do some self-evaluation. I think that was the biggest bonus for me," he said.

In assessing the week of activities, Dr Paul Rhodes, programme director of Jamaican Arts Odyssey, said the event was "successful with room for improvement both with marketing and strategic planning".