Six GM recalls in one day 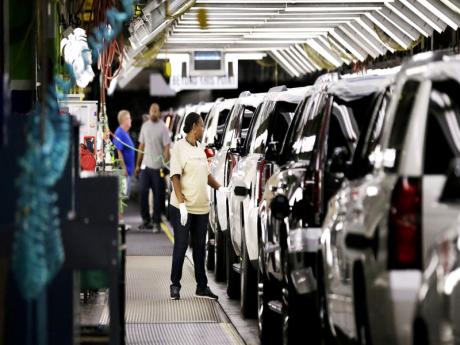 An auto worker inspects finished SUVs coming off the assembly line at the General Motors in Arlington, Texas. - Contributed

Wednesday's recalls total nearly 823,000 cars, trucks and SUVs in North America, plus a small number of exports. The number of vehicles recalled in the latest round and reasons are as follows.

475,161 total. Covers Chevrolet Equinox, GMC Terrain and Cadillac SRX models from the 2010 through 2012 model years, as well as the 2011-2012 Chevy Camaro, Buick Regal and Buick LaCrosse. Bolt securing driver and front passenger seats can fall out and seat can move up and down freely. GM knows of one crash and three injuries caused by the problem. Drivers should use height adjustment until dealers can replace the bolt.

151,923 total. Covers 2014 Chevrolet Caprice and SS and Cadillac CTS, ELR, as well as 2014 and 2015 Chevy Silverado and GMC Sierra pickups, 2013 and 2014 Buick Encore and Cadillac ATS. Vehicles could have incomplete weld on seat brackets, according to data collected from laser welding machine from July 2013 to January 2014. Dealers will inspect the weld. If incomplete, they'll replace lower seat track at no cost to owners. No crashes or injuries reported.

127,235 total. Covers 2011-2013 Buick Regal and 2013 Chevy Malibu equipped with front turn signals with two bulbs on each side. If one bulb burns out, driver wouldn't get signal of rapidly flashing arrow on dashboard. Dealers will reprogramme the controls. No crashes, injuries or complaints known to GM.

65,276 total. Covers 2014 Impalas with belt-drive electric power steering. Some drivers could lose power steering while driving, due to poor electrical connection in control module. Vehicle could still be steered, but with greater effort. Dealers will inspect and clean paint from behind an electrical system nut and update power steering software. GM knows of one crash, but no injuries.

3,065 total. Covers some 2014 and 2015 Chevrolet Spark mini-cars imported from Korea. Cars can lose steering control. Lower control arm bolts that are too loose and could cause separation of the arm from the rest of the suspension. Dealers will inspect the bolts to make sure they are tightened to specifications. No crashes or injuries known to GM.

25 total. Covers 2015 Chevrolet Tahoe and Suburban, GMC Yukons. Roof racks may have been attached with wrong nuts. That can cause holes in roof rail airbags. Eight of the trucks are in dealer stock and will be repaired before being sold.