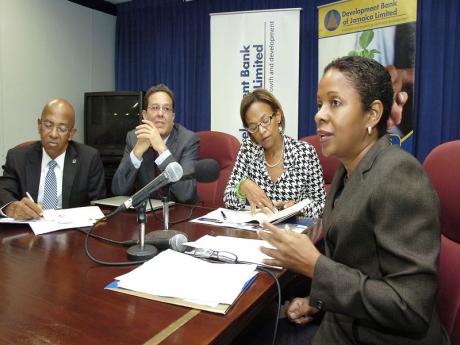 "Other Caribbean countries can learn from what Jamaica is doing. The partnership that exists between the Development Bank of Jamaica and the private sector can be used as a model by other countries seeking to establish a venture capital industry," she said.

Turner-Jones, who was speaking at a press conference hosted by the DBJ to announce the staging of the second annual venture capital conference in Kingston on Wednesday, express optimism about the growth of the venture capital market and said she looked forward to the IDB's continued participation in the programme.

In February 2013, the DBJ signed a non-refundable technical co-operation agreement with the IDB through its Multilateral Investment Fund and as such are firm partners in the Jamaica venture capital programme, said a release issued by the DBJ.

DBJ chairman Joseph M. Matalon emphasized that one of the imperatives of the venture capital programme was building strong linkages with international development partners, the Jamaican diaspora as well as its Latin American and Caribbean partners.

He said that the team, along with the IDB and the World Bank, had embarked on a programme of knowledge development, information sharing and sensitization of stakeholders, to increase awareness and move local market participants along the 'learning curve'. Activities included speaking engagements, presentation at seminars and workshops as well as participation in local panel discussions and sponsorship of special market events.

Reflecting on the past year since the first conference, Matalon reported that one of the outputs of that event was an investor panel of local public and private sector investors, including institutional investors, corporates, investment bankers and advisors, as well as pension funds and multilateral partners.

The panel's mandate was to encourage the establishment of venture capital and private equity funds operated by qualified local and/or international fund managers, who are fundraising for investing in companies operating in Jamaica.

Matalon said that the National Business Model Competition (NBMC) was also introduced to Jamaica in 2013 with the objective of encouraging and promoting creative thinking and the entrepreneurial spirit and create a pool of potential businesses.

Last year's guest speaker Paul Ahlstrom offered prize money totaling about J$2 million and a place in the international competition. The ICD Group of Companies matched this sponsorship offer, while further sponsorship was secured from the DBJ, through the Jamaica Venture Capital Programme (JVCP), the IDB's Multilateral Investment Fund and the Private Sector Organization of Jamaica.

The DBJ said the finals of the NBMC were held on March 6 and 7 at the Jamaica Conference Centre in Kingston where HERBOO Enterprises, a team of five student entrepreneurs representing Northern Caribbean University, emerged the national winner.

Matalon also reported that the JVCP is supporting the establishment of Jamaica's first angel investor network - First Angels Ja. 'Angels' are typically mature, successful, high net worth individuals who themselves may be entrepreneurs who want to give back and assist in coaching young, budding entrepreneurs.

Speaking about the way forward, he said that specific legislation was required for the industry and the JVCP had identified legal and regulatory changes that were required. Recommendations have been documented and short, medium and long-term strategies have been devised. Legislative amendments are to be submitted for consideration by the Ministry of Finance and possibly the Cabinet during financial year 2014-2015.

This year's conference will be held at the Jamaica Conference Centre from September 8 to 10.